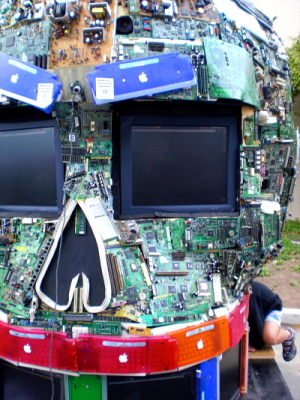 Nearly two weeks ago I hopped on a plane to San Francisco(again) and translated a presentation based on my “Make Like a Tree” articles into binary code, so the computer programmers would understand it.

Maker Faire is much more than your average craft show. Around every corner, you’ll find a a pointless yet poignant doodad, a jaw-dropping technology demonstration, or the tools and materials that invite you to imagine the possibilities…because we hope to inspire others to make stuff too.

Why is this reconnection to our creativity so important? It was one purpose-driven thought from ordinary individuals that invented the wheel, set out to cross the Atlantic, and revealed the fabric of space-time. Making things, both literal and existential, pulls us through history, and simultaneously brings humanity to the verge of a collapsing eco-system. Most of us had no hand in executing modern manufacturing techniques, but we must use both hands to fix them.

Eco-consciousness was a dominant theme throughout this event. The concerns are now common knowledge, and solutions are surprisingly revealed through grass root efforts. 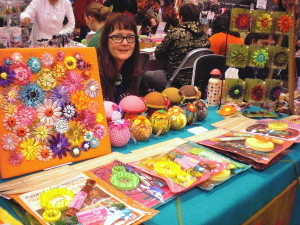 Upcycling and dumpster diving for parts was common practice in many exhibits, such as the intimidating interactive Skull by James Burget, a 30ft tall flaming scrap metal sculpture, and many beautiful handmade goods at Bazaar Bizarre (Cathy of California
is pictured here with her reclaimed raffia flower accessories and kits). We also saw widespread use of alternative energy from a school bus RV that aims to run on cooking oil to a rock concert powered by fans riding stationary bicycles. There was a parking lot’s worth of plug-in cars, an algae powered whatchamacallit, and DIY greywater installation. 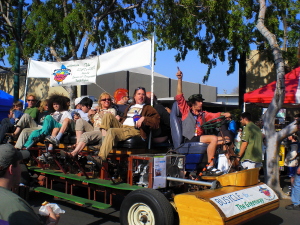 Though not always practical, these combinations of art, technology, and activism are powerful food for thought. Take, for instance, The Buscycle. It has hit the streets across the country, inviting 14 peddlers at a time to harness their physical energy together in an effort to create mass transit.

Diverse as they are accessible, these projects were largely the work of your average-citizen enthusiast. They are putting in more effort than many big businesses to stop wasteful consumption and keep carbon emissions under control. Dedicated indie crafters are a driving aesthetic force in the equation of eco-consciousness. Seeing them brought together fills me with hope.

This is the first post in a series about my experiences at Maker Faire, as it demands an unprecedented amount of run-on sentences. In my next installment, I’ll explore obvious gender majorities in the categories of crafting and technology. You can see my entire collection of Maker Faire photos on Flickr. 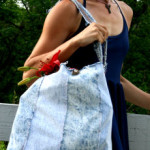 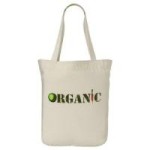