Last March in Pittsburgh, the first annual Craft Congress was held. Fifty organizers and icons of the indie craft movement gathered over a weekend to share knowledge and eat cupcakes. I was lucky enough to be one of them. The cupcakes were delicious.

As my plane took off from St. Louis that Friday morning, I anticipated someone there would explain how to promote a craft show into the stratosphere and run it like clockwork. The feeling crept in that my event was a speck of dust in comparison to what others had accomplished, regardless that we had nearly 100 vendors for Strange Folk‘s maiden voyage. Certainly, I questioned the validity of my involvement in what seemed a definitive moment of this growing subculture.

Much to my surprise there was not a mogul among us, despite the presence of successful start-ups like Etsy, The Sampler, and CRAFT magazine. All were submersed in their own projects and genuinely supportive of others.

As a loose-knit network, we had already gathered around the idea to reclaim crafting and catapult it into pop culture. Interestingly enough, this has been accomplished largely through the internet. Now, face to face for the first time, we attempted to define the genre and eagerly exchanged resources. There was even talk of forming an umbrella organization for the benefit of small businesses and events. 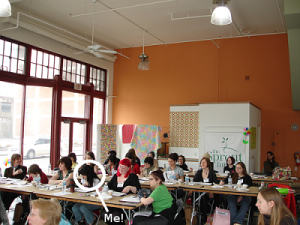 Notwithstanding exceptional comradery, our opinions were vast, and we took pride in the fierce independence of our endeavors. Much had been realized, but very little accomplished from an organizational standpoint.

Jenny Hart of Sublime Stitching made one resonating point in the final minutes of a hurried session to decide how we would go forward. She stressed that we were not chosen by the community at large to govern as the event’s name would suggest, and therefore should not try to assert authority over them.

By the end of the weekend, it was exceedingly obvious: the indie craft movement will not mobilize and model itself after “distinguished” visual arts associations. We are Rock and Roll. We are the grass growing up through the cracks in the sidewalk.

“Craft Con 2008 heralds huge growth for the project. The event in San Francisco has been planned via the internet by crafters from all over the world. April’s conference will welcome participants from all areas of crafting, making a special effort to connect younger and upcoming crafters with the experience and savvy of their antecedents. Craft Con will facilitate much broader discussion and planning in key areas of concern for the movement, in particular the viability of sustainable business and enterprise and expanding the influence of crafting in society.”

If you are interested in attending, please visit craftcon.org for more information. Applications will be accepted online until all spaces have been filled.

That’s not all, I need your help. It’s my privilege to be giving a presentation on the environmental impact of the craft culture. I wish to acknowledge the ingenuity of those who upcycle and re-purpose, but also paint a realistic picture of the rising tole our manufactured supplies take on the planet. It’s blatantly obvious as you stroll through the aisles of any corporate run craft store that popular hobbies require substantial amounts of imported and unsustainable goods.

We need only make ourselves aware to begin a larger effort of demanding earth friendly supplies. For starters, be sure to join my Fake Plastic Flower Death Squad, but more importantly, I want to hear your thoughts and ideas. If you have resources, opinions or experiences to give me further insight as I create my presentation, please don’t hesitate to leave them in the comments, or you can e-mail me at autumn@craftcon.org. 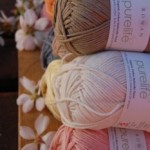