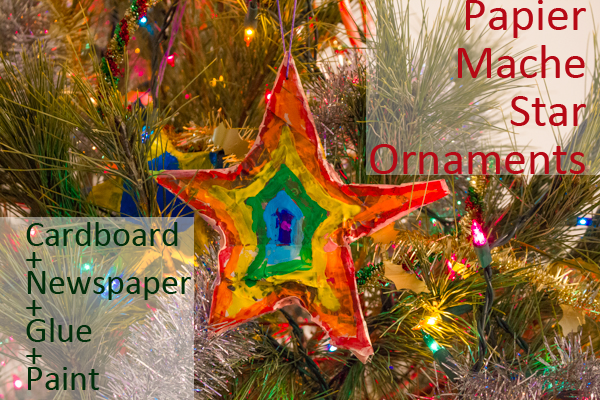 Raid your recycle bin for newspaper and cardboard and make these colorful papier mache star ornaments with your kids.

Got a really crafty kid, one who is fine with those quick, cut-and-paste craft projects, but really shines when she gets to dig into a multi-step, immersive, genuinely creative hand-on experience?

That kid is going to LOVE making these star ornaments!

These papier mache star ornaments take more time to create than your typical Christmas craft, which tend to be more about getting the project done with as little time and mess as possible this time of year. This project is worth it, though–these stars are fun to make, they’re user-friendly even though they’re time intensive, and they let kids exercise their artistic muscles in ways that most of those quick-and-easy Christmas crafts just don’t.

So gather up these supplies (you’ve already got them on hand), lay down plenty of extra newspaper over the table and floor, and walk your kid through making these star ornaments for herself. When you’re done, your kiddo might well have a tree full of stars to show for herself, and a few more extra to give as gifts.

– newspaper. Have your kiddo tear it into strips.

– sturdy cardboard. Packing/shipping boxes work well for this, and if you can get any corrugated cardboard, its extra depth will make the star ornaments look extra cool!

– scissors or box knife. My kids can cut the regular cardboard themselves with scissors (building up that hand strength!), but I use a box knife on the thick corrugated cardboard.

– paint or other embellishments. My kids wanted to paint the particular set of star ornaments shown in these photographs, but that isn’t the only way to go. Tissue paper, stickers, glitter, pom poms, pretty paper–anything that you’ve got to hand would be fine as embellishment for these.

1. Cut out stars from cardboard. Have your kiddo draw or trace a star shape onto cardboard. If you’re not absolutely confident that your kid can draw an excellent star freehand, then you’d better give her a star to trace, because if she draws a star, and it doesn’t look like a star, and she NEEDS it to look like a star (some kids care deeply about this, and some kids don’t), then she’s going to be frustrated, and that’s not fun.

Depending on the thickness of the cardboard and the kid’s hand strength, you may have to help her cut her star out, as well. Thicker cardboard works better for this project, but, of course, thicker cardboard is harder for kids to cut. 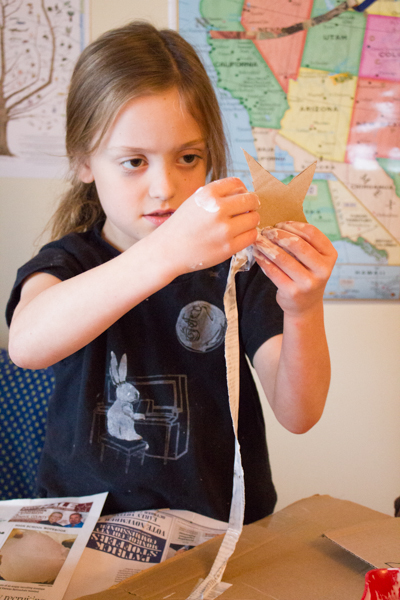 2. Papier mache your cardboard star. Have your kiddo dip newspaper strips into the glue/water mixture, squeegee them off with her fingers (you laid down plenty of extra newspaper, right?), and then wrap the strips around the star. Definitely cover all of the cardboard with newspaper, but the goal is to go over and beyond that, and to make the papier mache layer as thick as the kid has the time and patience to make it. It’s the dimensionality that makes this star project really interesting, so feel free to have the kiddo pile it on.

3. Let the star dry. This does take a while, especially if you’ve done as much papier mache as I think you should, but it won’t take as long as you think it will, especially if you’ve got central heat. That furnace is really drying! Nevertheless, plan to set the stars aside for at least a couple of days on top of a piece of parchment paper, a Silpat mat, or another non-stick surface. 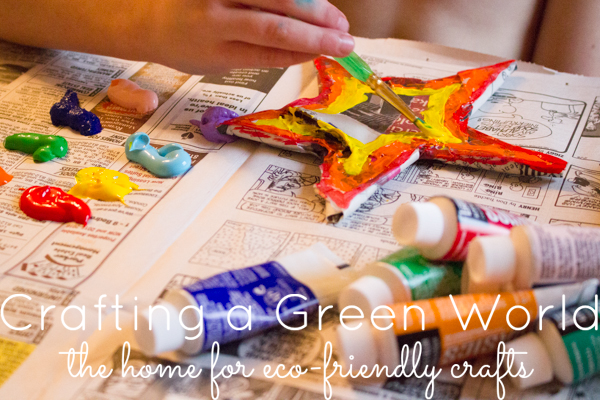 4. Embellish the stars. Once the stars are bone dry, feel free to have your kiddo decorate them however she’d like. You can gesso them first to hide the newspaper, but I think that the newspaper peeking through gives a really cool effect, too–I like things to give little glimpses of what they’re made of, you know?

5. Punch a hole and add a hanger. If you don’t own an awl

, you should totally get one–they’re dead useful. But if you don’t own an awl, you can also use a nail or a drill to put a hole near the top of each star. Use wire or embroidery thread to make a hanger for your kiddo’s star, and let her hang it in what is clearly the most awesome spot on the entire Christmas tree.

Because this project needs to be spread out over a couple of different days, it’s a good one for art classes, club meetings, or day camps. These stars also make cute gift toppers, and an entire set would make a nice handmade gift for your kiddo to give to a beloved friend or relative. 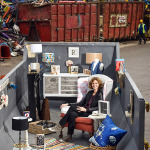