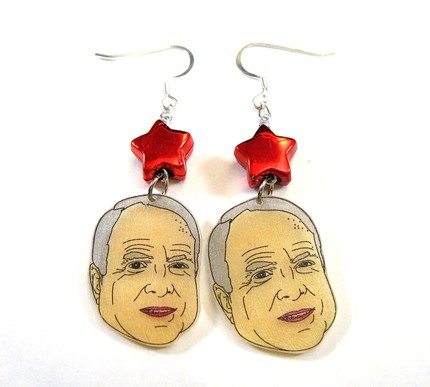 It’s election season ladies and gentlemen! I mean, well, it’s been election season since the beginning of the year but now we’re into the final rounds; the all-out, smack-down, Thunderdome two-men-enter-one-man-leaves, thick of the fight. What better way to voice your support for your particular candidate and focus attention on the issues you care about most than some DIY election crafts?

My first piece of political craftiness will show your above-average grasp of U.S. politics (by knowing at least one of the candidates for president). You’ll certainly be fashionable if you sport these beautiful earrings blessed with the face of a possible U.S. president-to-be! John McCain never looked more glamorous. Or more environmentally friendly! Keep your shrink plastic from going into the ocean by rotoscoping his or anyone else’s face onto it, shrink it, then add whatever it is that’s lying around your house to help adorn it with makeshift charms and doodle-e-dads! If you ever get number 6 plastic take-home containers at restaurants you can use those instead of official shrink plastic, it behaves the exact same way. Just cut the shapes you want out of the plastic box, imprint the mug of a prominent politician, shove in the oven and there ya go! Artist CBT is who you can thank for this little idea, I suggest checking out some of her other creations.

Perhaps, though, you’d like a perfectly environmentally friendly way to support your favorite candidate, perhaps Barack Obama? Well, it’s a good thing Halloween is just a few days away from the presidential elections. Forget yard signs made out of freshly cut trees and toxic plastics; why not show your love for Obama by carving his effigy into an organically grown pumpkin!

Instead of giving out teeth-rotting treats to children why not illuminate their political consciousness (and the parents chaperoning their neighborhood journey) with Barack Obama’s glowing, hopeful, orange smile? Why stop there? If Obama fans really wanna politicize gourdes they could inscribe the faces, names, and slogans of prominent Republicans and smash the ever-loving-crap out of them during the various protests they’ll be attending. Support local farmers and let off some steam by having a local Bush smashing party in your backyard!

But why stop at pumpkins? Teresa Anderson goes right through the desolate salad bar at the local buffet and churns out some delicious anti-administration art:

Oh Cheney, you’re politically powerful, mysterious, somewhat grouchy, and high in fiber! What better way to adorn a sign than colorful seeds and grains? Forget chemical coloration, use the vibrant wholesomeness of mother nature to lend a voice to your struggle! Lisa Frank and Crayola be damned, we’re going all-natural!

So many options; so many ways to express your admiration for the leaders of our somewhat dysfunctional nation; so many ways to blame them for its misfortunes. The DIY green movement is going to change the way we do protests in this country; all it takes is a little ingenuity. I think you crafters have proven yourselves to be rich in that.

Enjoy the political season craft-people; the best way you know how!

The photos and concepts contained within this post were taken from the following sources (in order of appearance): CBT (DIY or DIE), Casey Rawson through politico.com, Teresa Anderson, 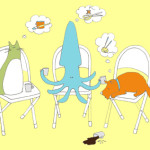