Are you admiring the crafty hats donned by democratic delegates at this week’s convention? They get patriot points for glitter, but MSNBC’s Chris Mathews took the cake with his kinetic hair sculpture. It reminds us all of the important part wind power can play in our renewable energy needs.

That’s not exactly what I had in mind for the focus of this post though. Protests are a great example of craftivism that easily tips the scale to activism. After all, you can’t buy “Fuck the War” signs at Wal-Mart.

Rudimentary as some displays may be, how is scrawling on a piece of paper and stapling it to a stick any less crafty then pulling loops of string through each other with a stick? That said, there were some stellar examples of handiwork in the mile high city. Check out these painted Obama shoes at the Manifest Hope exhibit. 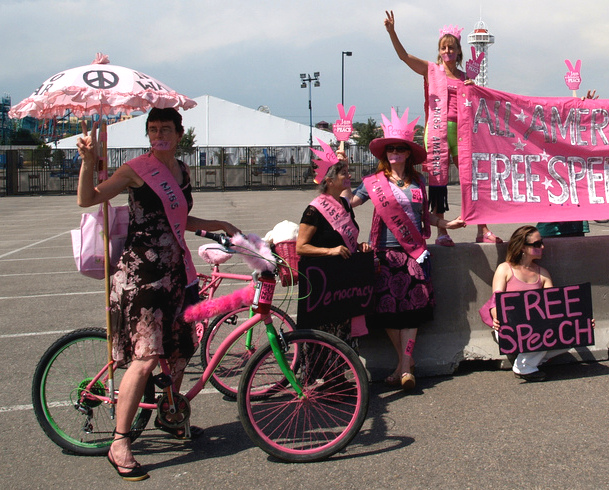 You couldn’t help but notice an abundance of pink in the crowds outside, partly to thank is codepinkalert.org, a site promoting peace activism among women. Crafty? Check. That’s probably why a cop shoved one of them to the ground. He was just jealous of her mad DIY skills. 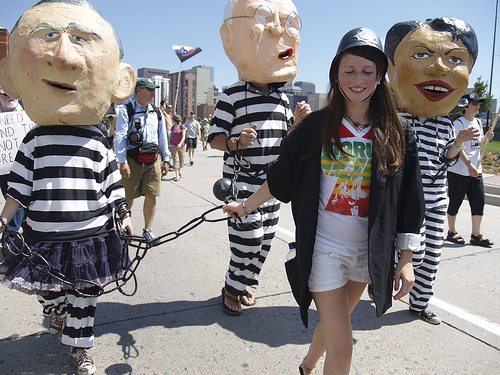 Some people have other ideas about who belongs in jail. Though the tutu on paper mache George W. Bush is a nice touch, the look on Dick Cheney’s face is priceless. He once stated, “I had other priorities in the sixties than military service.” Indeedy Dick, this young lady thinks your main priority should be making license plates from now own.

Freedom fighters (and haters), I’m looking forward to more of your creative shenanigans at next week’s republican convention. Is anyone interested in knitting an 800 lb stuffed elephant? They might display it proudly behind the podium, so long as you let Cindy McCain take all the credit for making it.