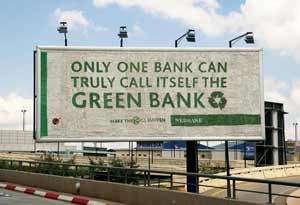 We missed this when it happened a couple of weeks ago, but a bank in South Africa has been up to some interesting advertising gimmicks. Billing itself as a “truly green bank,” Nedbank installed what is being called the world’s first billboard made from woven plastic bags in Johannesburg, South Africa.

The billboard was created using 2,000 (!) reclaimed plastic bags that were woven together to make the billboard, which measures over 120 feet in length. Nedbank employed seven crafters to create the billboard, taking them about six weeks to complete the project, making this a huge handmade project.

This is the third in a series of greener advertising for the Bank. The first billboard boasts solar panels that power its illumination at night, and provides extra power to help run a kitchen at a school in Alexandra. The second billboard has a wind turbine, where the electricity created from it goes to help power a different school in Cape Town.

Say what you will about advertising and banks – but boy do these South Africans have something on us. Such a great innovative idea that helps support both the environment and crafters.

What I like best about this woven billboard is its use of reclaimed materials, as all the bags were once litter, and of course that the whole thing is handmade. It is a wonderful example of sustainability and how to support local crafters and really get’s to the heart of economic, social and environmental capital. 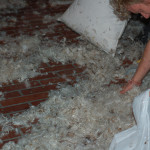 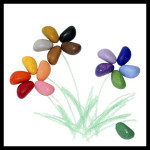