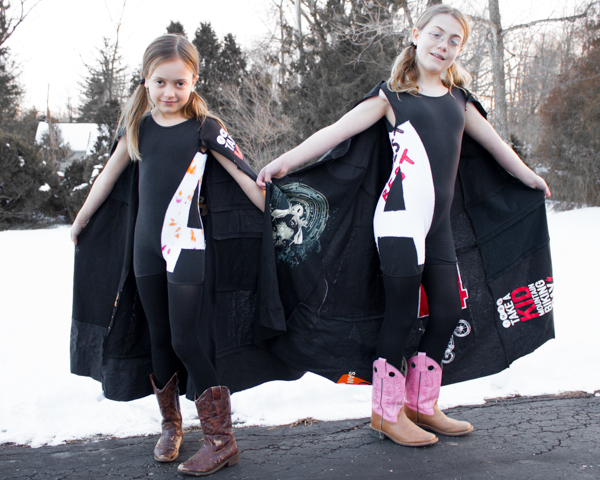 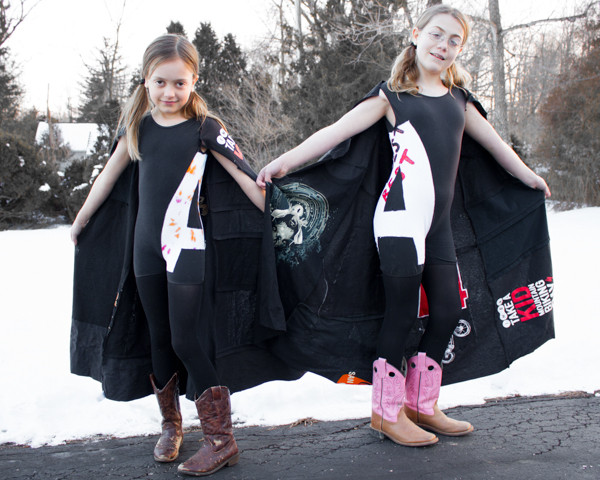 I’m going to tell you a secret:

My children are superheroes, and their regular selves are just their secret identities. They call themselves The Awesomes, and although they usually use their superpowers to put on performances in floor surfing and the high-flying aerial arts, they’re not opposed to solving the occasional mystery or fighting the occasional crime.

What they lacked, however, and what all superheroes need, of course, are costumes. Matching costumes. Costumes that could work equally well in both performing and crime-fighting. Costumes that must cost nothing to make, because a child’s fantasies are fickle. A few months ago, The Awesomes were instead trick ponies. A few months from now, perhaps they’ll be firefighters, or dragons. I’ll need to save my DIY budget for a garden hose or a smoke machine.

Here’s how I constructed two superhero costumes out of nothing but old T-shirts, fold-over elastic 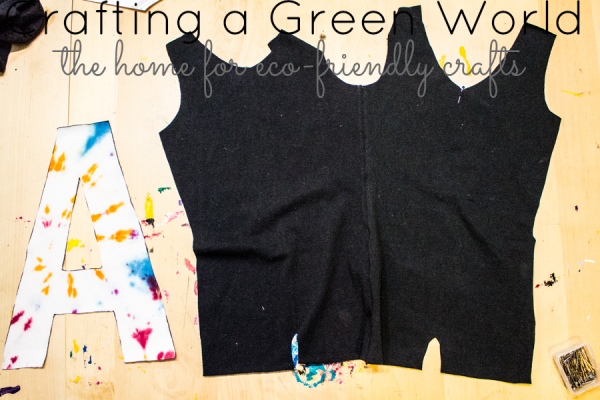 1. the biketards. These T-shirt biketards were both some of the easiest sewing and some of the hardest sewing that I’ve ever had to do. My eight-year-old’s T-shirt biketard was dead simple. She’s still built like a straight little noodle, and T-shirt fabric has plenty of stretch for a straight little noodle. I used my T-shirt leotard tutorial for her, cribbing the biker shorts bottom from this Jalie spandex biketard pattern.

My ten-year-old, however, has curves. Once your kid has curves, jersey knit just no longer has the drape to both hug those curves and stretch over them. I modified that same Jalie biketard pattern for the lack of stretch, lengthening it and widening it and going through eight full muslins before I made a biketard that didn’t pull at her but didn’t gap. As soon as she grows an inch, though, I’d have to do it again, so from now on, I’m sewing spandex biketards for that kid. 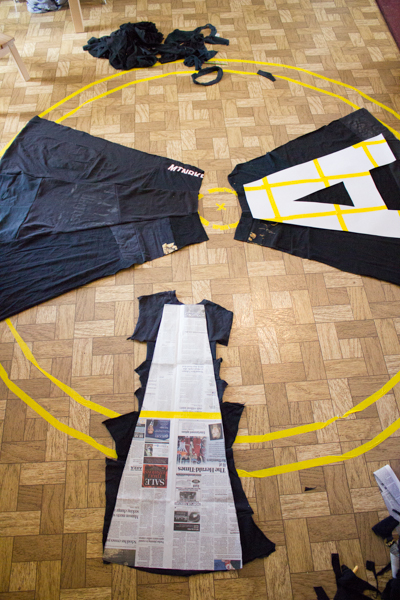 2. the capes. The kids actually wanted giant, full-on Dungeons & Dragons-style capes for their costumes, but those kinds of capes are pretty heavy. I didn’t want the capes to tie around their necks–that would pull against their throats and be more of a strangulation hazard than I’m comfortable with. I wanted to attach the capes to the back and shoulders of their biketards, but a heavy cape would also pull against that fabric and, since it’s only jersey knit, it would stretch out of shape too easily.

We compromised, therefore, by making the capes wider than I wanted but not as wide as they wanted–it’s not a compromise if anybody ends up happy! I constructed the capes exactly as you do a circle skirt; I even layed out a giant masking tape circle right on the floor so that the kids and I could evaluate our progress.

We pieced together loads of old black T-shirts, many given to us from family and friends, to make these capes. I cut out a pattern from newspaper, and the kids’ job was to piece together black T-shirt scraps until they were larger than that pattern piece; I’d then cut the piece to size, and sew it to the rest of the cape.

The kids just crazy-stitched the T-shirts together however they wanted. I might come in later and reinforce some stitching, but overall, the job was about the least fussy sewing that anyone could imagine. It was a great kid project.

3. the applique. Every superhero of COURSE needs her logo on her costume, and both biketards and both capes feature the Awesome A that signifies The Awesomes. I followed my directions for appliqueing jersey knit without using fusibles, and although it was time-consuming to applique each of those A’s, it wasn’t difficult. 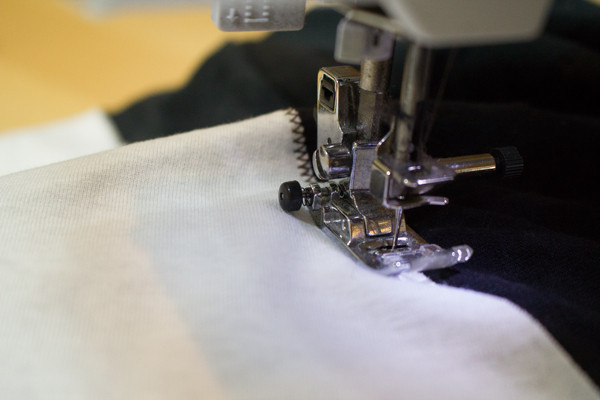 My superheros are quite pleased with their complete costumes. If I’d had creative control, I would have made choices such as piecing together smaller pieces of T-shirt fabric, so that the graphics on the shirts became unrecognizable; I used this technique with a pieced T-shirt shirt that my kid designed last year, and ended up really happy with the effect.

I did NOT have creative control, however, and the kids both liked the ease of working with the larger T-shirt pieces and don’t seem to notice the giant Pan’s Labyrinth or Mountain Bike Rally or Down Syndrome Walk graphics on their finished capes the way that I do. And they’re their capes, so they get to decide! 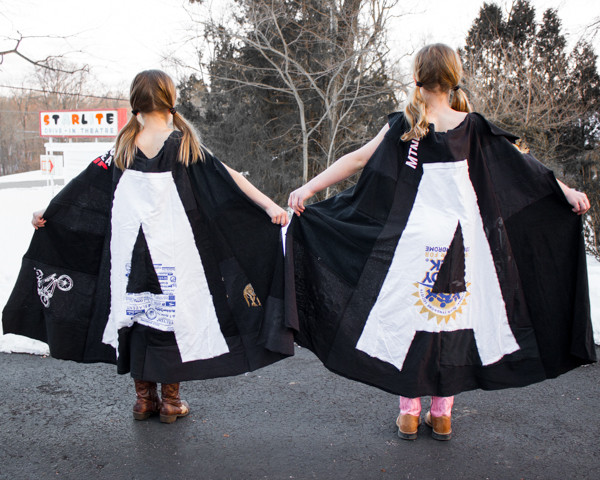 I’d like to say that these superhero costumes are completely finished–after all, The Awesomes are making their debut at a Comic Con in a couple of weeks!–but the kids are now hitting me up for a mask, and wrist cuffs, and oh, could I paint an A on their faces, too?

So, yeah. Maybe we’ll work on them a *little* more… 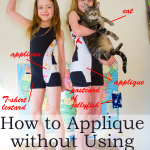 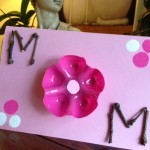