Previous Next
http://inhabitat.com/knitta-pleases-magda-sayeg-is-covering-the-world-in-yarn/
Magda Sayeg from the all female guerilla knitting group 'Knitta Please' has covered an entire bus in Mexico City

Magda Sayeg was the founder of the yarn bombing movement, and in this fascinating talk, she dives into how her act of craftivism grew across the world.

Sayeg and a group of other female fiber artists formed the group Knitta Please back in 2005. Since then, yarn bombing has grown from its Texas roots into a worldwide urban beautification movement. Nothing is too big or too small for a yarn bomb.

I’m a long-time fan of Magda Sayeg, so when I came across her recently released-TED Talk on the birth and growth of the knit graffiti movement, I couldn’t wait to watch. It’s inspiring to hear her talk about Knitta’s humble beginnings and how life-altering that first act of craftivism was for her.

I love when she describes how people reacted to her wrapped stop sign poles and how that sense of wonder grew rather than faded, the more yarn bombing she did. Have you ever encountered a wrapped street sign, tree, or bench? There’s something magical about those pops of vibrant color in the grey urban landscape, isn’t there?

In her talk, she shares her theory about why knit graffiti is still so popular, more than 10 years later. She feels like it’s a break from our cell phones, tablets, and laptop screens. When you encounter a yarn-bomb, it’s something soft and real on your daily commute to work or harried trip to the grocery store.

I kind of feel like that feeling of  what she calls “hidden power in our hands” is what has sustained the craft movement as a whole, don’t you? What speaks to me about crafting is that it’s a time set aside to slow down. To make something with care. It’s a break from big box stores and rushing to get supper on the table, where we just get to sit and make.

Magda Sayeg’s TED Talk is only five-and-a-half minutes long, and I found it so uplifting to watch. I encourage you to take the time to watch it, too! The video is at the top of the page. 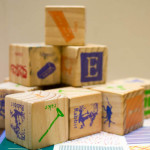 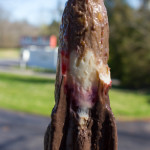