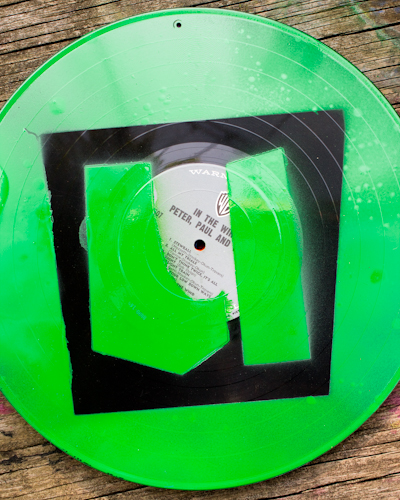 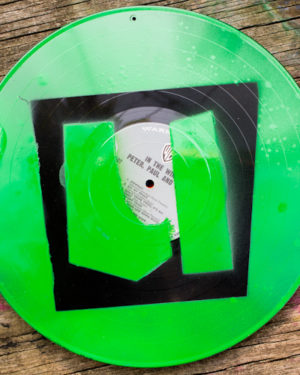 I have a gigantic vinyl record album collection.

Seriously, I have hundreds of records. I listen to them every day, everything from the Annie soundtrack to Led Zeppelin, and my little girls can handle a record player as easily as they can a cassette player (yep, we kick it REAL old-school around here), and easier than they can handle a CD player or my ipod.

One of the problems that you encounter when you scrounge and scavenge as many records as I do, however, is that most people don’t know how to store their old records, and so the majority of records I come across are scratched or warped or just plain pathetic.

This project takes five of those pathetic vinyl record albums and upcycles them using my Cricut, some cardstock, and spray paint, to turn them into an awesome stenciled music-worshiping sign for my living room and my craft fair booth. Follow along for the full tutorial: 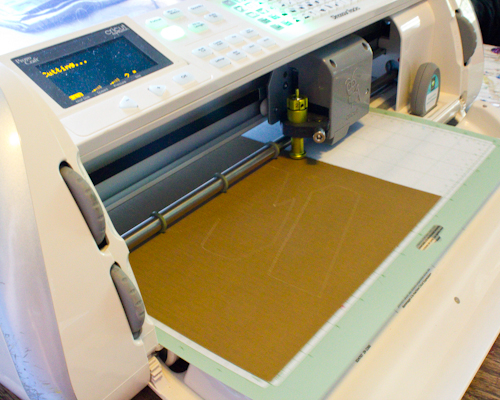 To stencil your own vinyl record album, start with vinyl that is clean and dry, and cut a stencil to fit it.

You can cut a stencil out of practically any material. If you want to re-use your stencil numerous times, you may want to purchase template plastic (hint: you can find it with the sewing supplies), but more eco-friendly options include recycling cardboard or using up stash cardstock. Contact paper isn’t particularly good for the environment, but it is sticky, so it makes a good stencil for vertical surfaces, or for stencils with islands that you just can’t do without. For this particular project, I’m giving some cardstock that’s already been drawn on another use before recycling it.

You’ll also be able to find sources for stencils almost everywhere. The internet has loads of free stencils to download, as do several more recently published books at the library, and die cutting machines often make great stencils. For this project, I’m using the stencil alphabet on the Dinosaur Tracks Cricut cartridge to cut out the letters that make MUSIC. 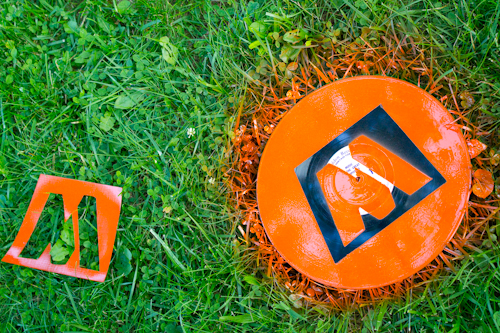 It’s easy to stencil a vinyl record album, since you can lay it flat on the ground and simply lay the stencil over it, with no need for adhesives.

You’ll notice that once again I’m using spray paint, which, thanks to its aerosol, is NOT eco-friendly overall. However, it’s the more eco-friendly choice for me, simply because it’s what I have on hand. I try to make do with what I have instead of driving across town to the big-box craft store whenever I need paint or glue or batting, and after a solid year of using my old rainbow set of spray paint for decorating my EZ-Up, and painting my daughter’s birthday piñata, and making graffiti art, and doing a million other art and craft projects, they’re only finally starting to run out.

You, however, do not need to buy aerosol products for your stencils. You can use a brush to paint on any type of paint that you prefer, although you will then need to stick your stencil to your vinyl so that it doesn’t move (I’d likely use spray adhesive–yikes!). 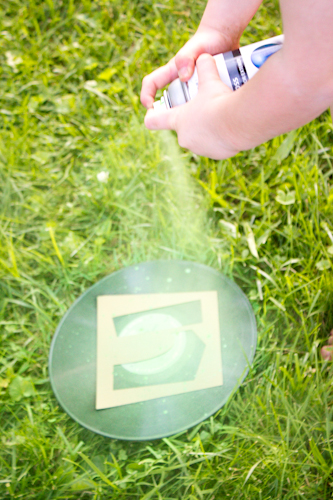 If you want to mount your stenciled vinyl album to your wall as-is, then you’re done! Half the time, my vinyl will be mounted to the wall. However, I also want to be able to use my project as three-dimensional signage over the record bowl display in my craft fair booth, so I’m going to hang my records in such a way that they twirl.

To do this, stencil both sides of your vinyl album, letting the paint dry between sides. 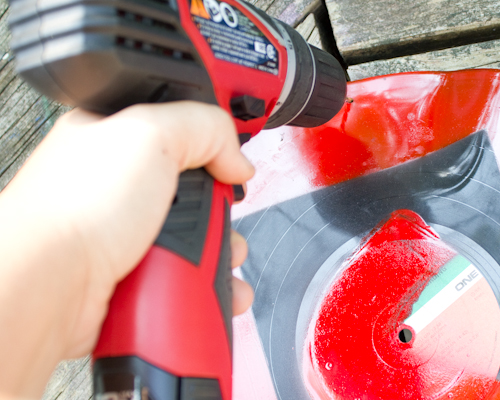 Then, using a Dremel or any regular drill, drill a small hole near the top of each album. 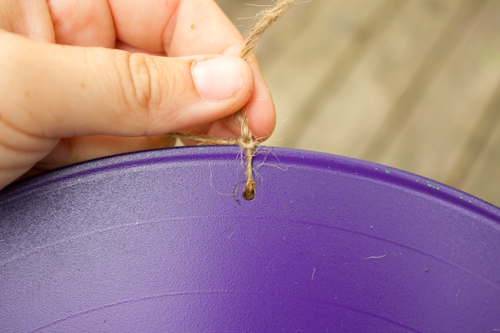 Using a very sturdy twine, or line, or cording, tie one end to the record, pulling the twine through the hole that you drilled. 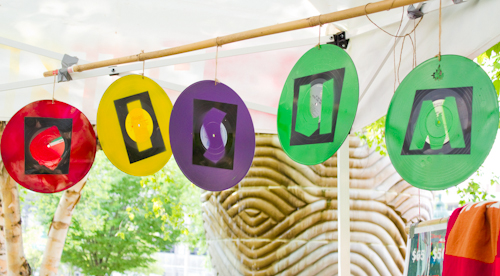 You can then tie the other end anywhere that will allow your record to hang free and twirl. I’ve tied my albums along a bamboo pole, which I’ve then duct-taped to the ceiling of my craft fair tent. Yep, MUSIC is backward, but that’s only because we’re inside the tent looking at it backwards–to all the passers-by, it reads correctly, and when the craft fair’s finished, the whole shebang goes back home to my living room wall. 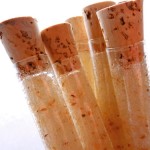 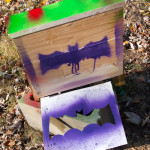