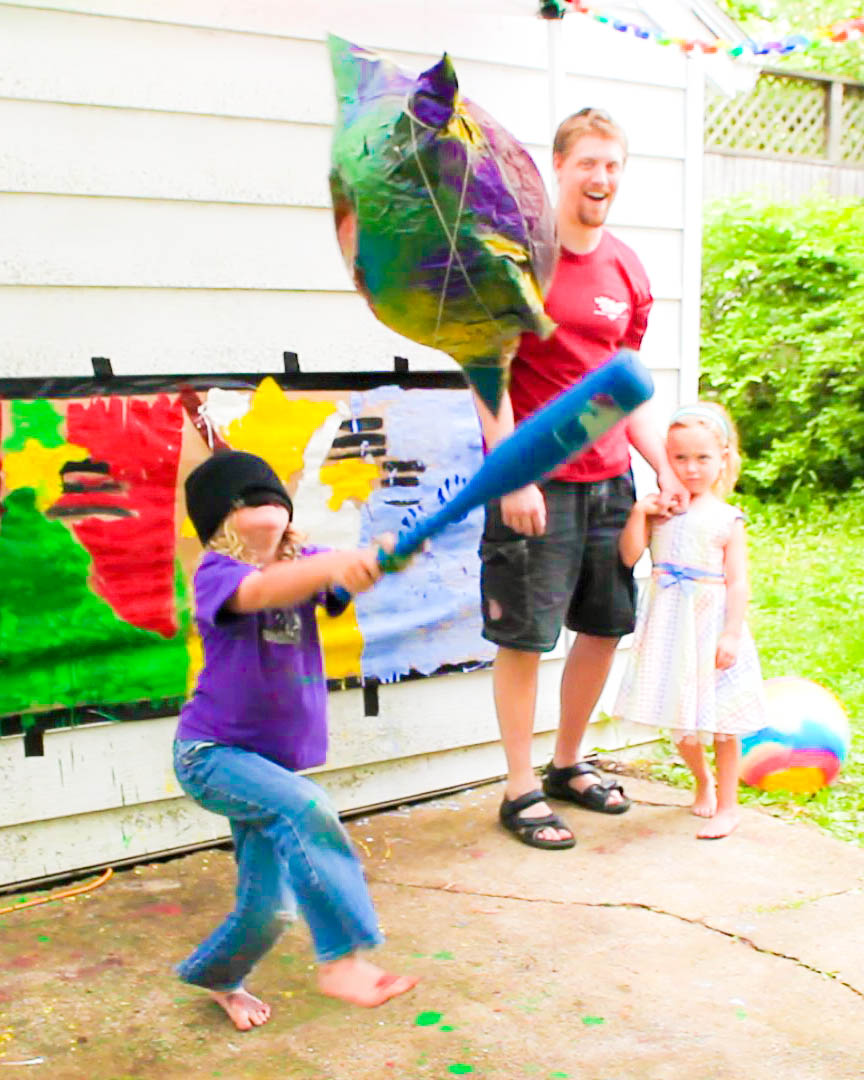 The amount of money that I was willing to budget for this party of a dozen children and their parents was, other than food (we do like our food!), exactly zero dollars.

The invitations were made with stash cardstock and acrylic paints and homemade rubber stamps. The games involved such major hits as “Pin the (Stash) Star Sticker onto the Giant Space Mural that You Painted Earlier in the Party (with Stash Art Supplies)!” The party favors were homemade star-shaped crayons upcycled from our old, broken crayon nubs.

The piñata, however–our family made that piñata all together, birthday girl included, with a week’s worth of newspapers, a balloon found in the junk drawer, a gallon of white flour glue, three pounds of candy from the store, and leftover spray paint from the garage.

In other words, it was a masterpiece. And here’s how to make it! 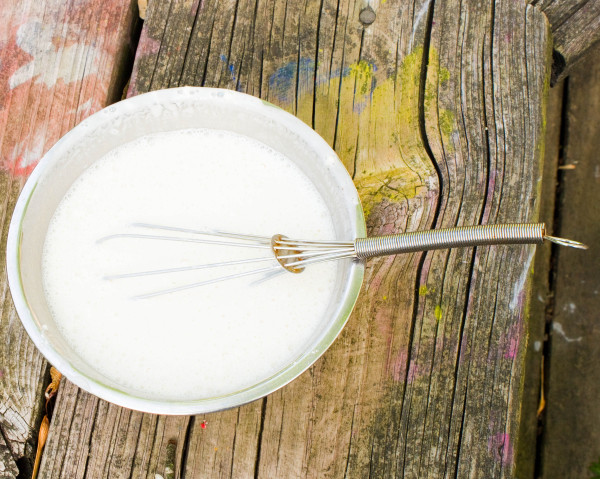 The form behind this particular piñata is a generic latex balloon. You can find perfectly round balloons as well as the usual teardrop ones, or manipulate your balloon into different shapes by tying twine tightly around sections, or even duct tape balloons together to create a pleasing shape. Don’t worry too much about making your balloon into the perfect shape, however–a little later is when you’ll get creative with cardstock and cardboard to make your piñata really come to life.

Along with the balloon form, prepare a big bowl of natural glue by mixing two parts water to one part white flour, and tear pretty much an entire day’s worth of newspaper into long vertical strips. 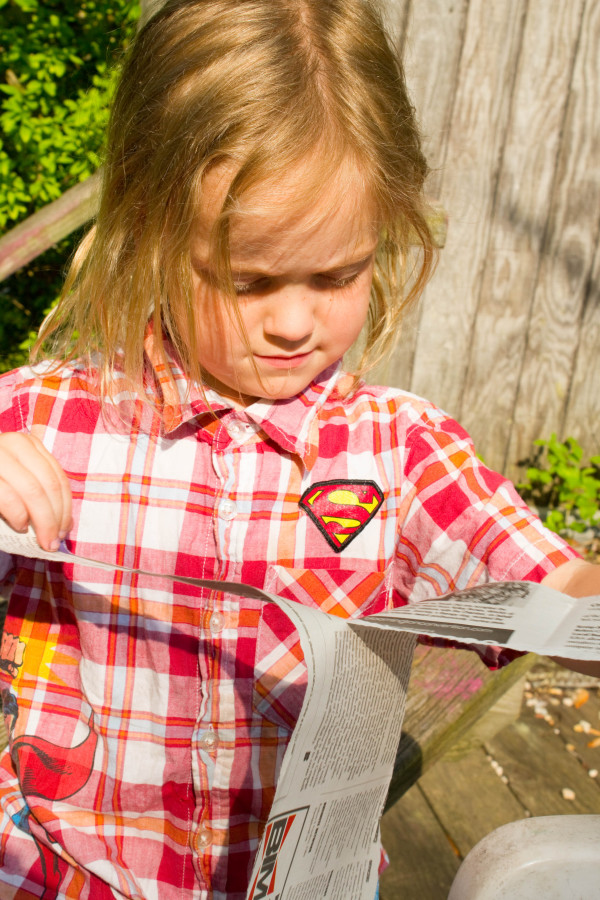 Set up outside or take care to cover your work surface REALLY well–this project is messy!–and you’re ready to get started. 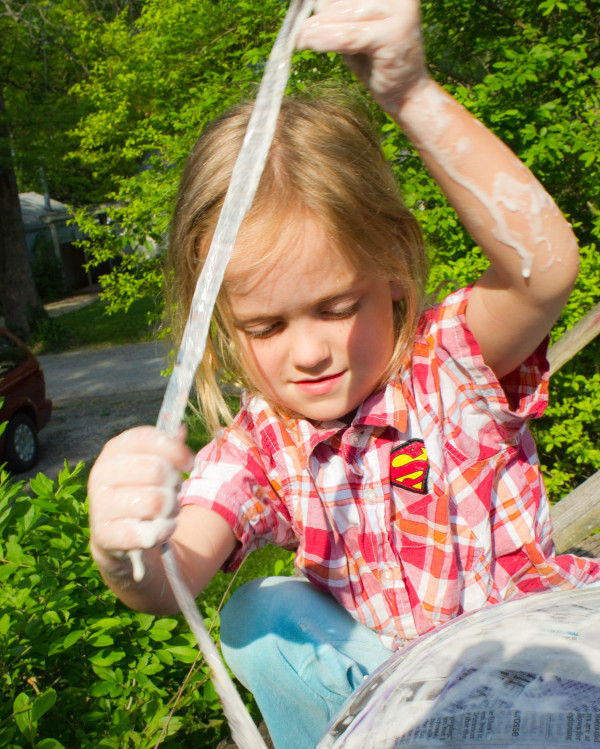 Dip a newspaper strip into the bowl of glue, lift it up and scrape off the excess glue, then smooth it down over the balloon. Repeat until the entire balloon is covered, overlapping the newspaper strips in all directions to make it sturdier. Leave a small hole at the balloon tie, if you’d like, or cover it over–it doesn’t matter.

Set the balloon out to air-dry on wax paper or any other non-stick surface–this may take a few hours. You’ll also need to turn the balloon periodically to make sure that it dries evenly. 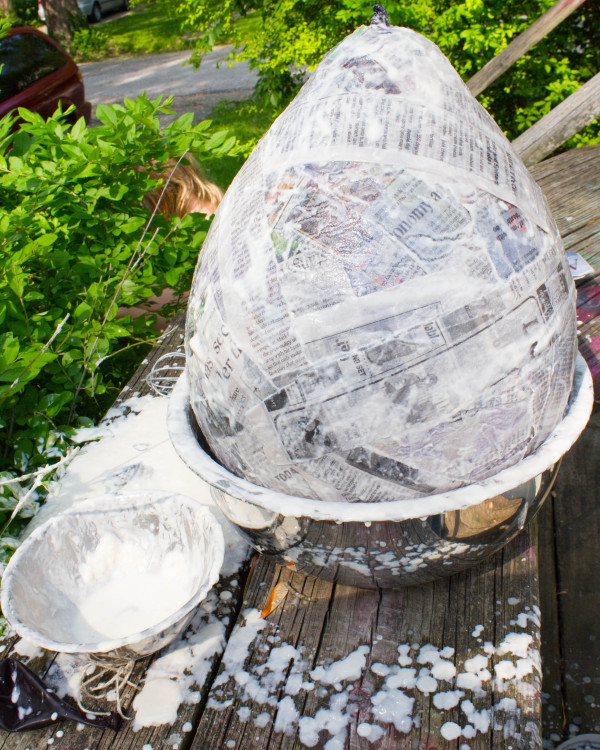 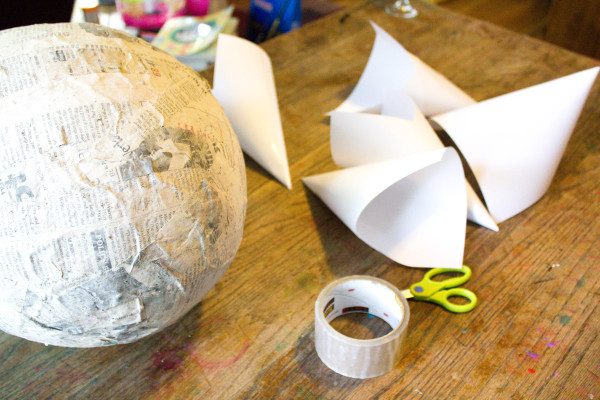 After a third layer of newspaper strips has completely dried, it’s time to get creative and use cardboard and cardstock to shape your piñata. For Sydney’s star piñata, I taped pieces of used cardstock into cone shapes, then trimmed them to fit neatly to the piñata and hot glued them into place. Later this summer, however, Willow wants an ocean-themed party with a whale piñata. For that one, I plan to glue a cardboard whale tale to one end of the piñata, cardboard fins to each side, and perhaps stick on a pipe cleaner water spout at the very end of the decorating. You can use pretty much any material that won’t bonk children painfully if it falls down on their heads–since you’re just adding it to the outside of the piñata it doesn’t have to be nearly as structurally sound as the basic piñata form will be. Consider food packaging cardboard of all shapes and sizes, toilet paper and paper towel rolls, egg cartons, etc. 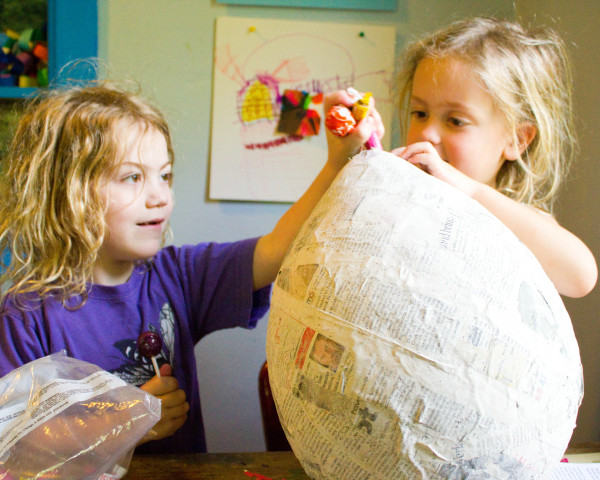 This is also the time to pop the inner balloon and fill the piñata with candy! If you didn’t leave a hole in the piñata already as you were wrapping it with newspaper, cut a hole out of the top of the piñata now using sturdy scissors or a box cutter. Fill with candy, and either cover the hole with one of your cardboard embellishments or wait to cover it with another layer of newspaper in the next step. 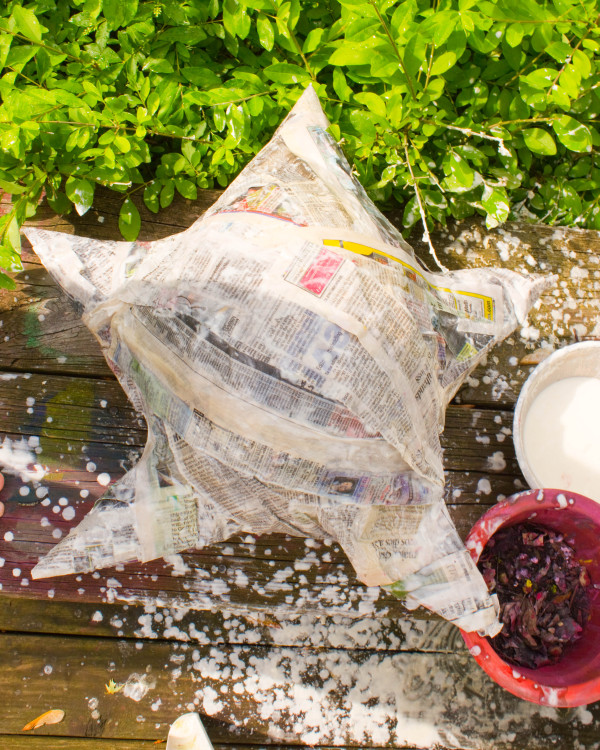 After these structural embellishments have been glued onto the dry piñata form, cover them, and enough of the piñata base to hold them soundly, with another two layers of newspaper.

It doesn’t work well, in my experience, to try to cover the entire piñata in additional layers of newspaper and glue after the inner balloon has been popped–without that counter-pressure, I find that an additional wet layer will rehydrate the layers underneath enough to flatten the bottom side of the piñata as it lays to dry. If the spot that you intend to use for hanging will remain dry as you cover your cardboard embellishments, then you can go ahead and pierce your hole and hang it up to dry perfectly evenly. Otherwise, just be mindful. 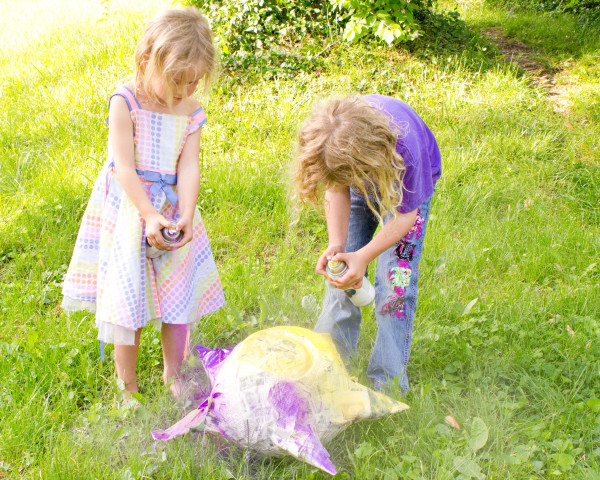 After the piñata is completely dry (and this could take over a day!), then you can decorate it however you wish. You can, of course, create a perfect piñata with fringed crepe paper. In our family, however, we like to decorate our piñatas with spray paint. It’s fast and easy and the girls love it. For a more eco-friendly option (or if the sight of that paint cloud at my daughters’ feet understandably turns you off), simply choose more eco-friendly paints. 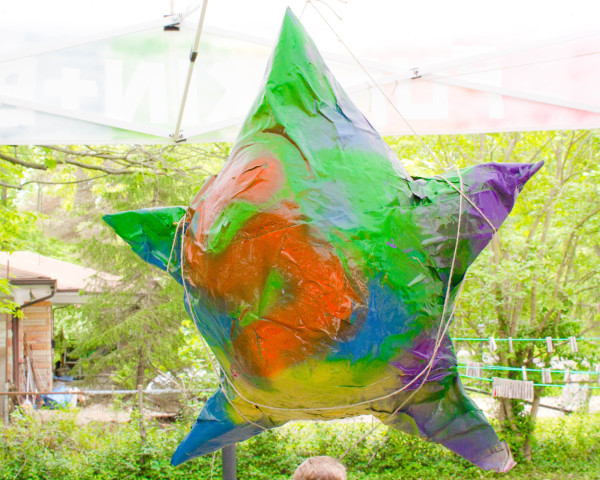 When you’re finished, you’ll have a perfect piñata! Just make sure to take some pictures before the small children start bashing at it. 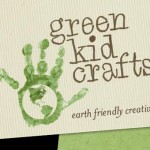 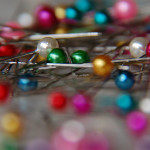