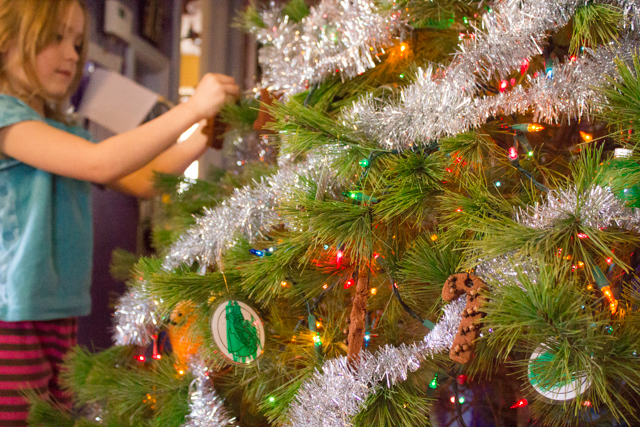 Cinnamon dough is as easy to make (and as fun play with!) as play dough, and the ornaments that you can make with cinnamon dough are both sturdy and sweet-smelling. 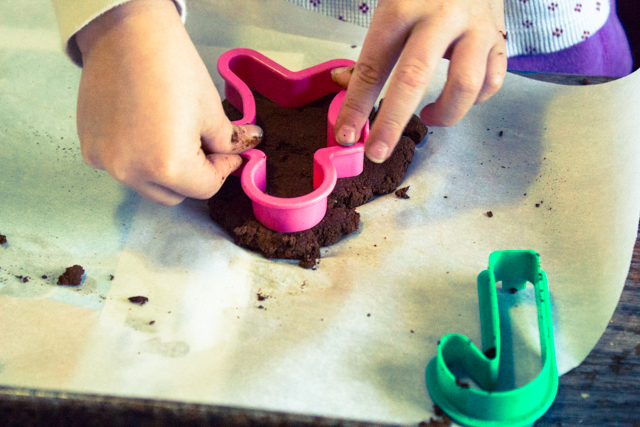 Add all ingredients to a single bowl, and combine by hand. Kids usually LOVE to goop around in squishy mixtures, so the good news is that you’ll rarely need to do this messy mixing yourself. I’ve been making cinnamon dough since my older daughter was two years old, and I have never had to actually touch this mixture with my own hands!

For whatever reason, however, this dough does occasionally require some futzing. If it’s crumbly or wants to crack as you’re kneading it, then it needs more applesauce. If it’s sticky, it needs more spice. Ideally, when fully mixed it should be quite pliable and smooth–it won’t have quite the elasticity and texture of homemade play dough, but it should certainly be similar.

You can model with this cinnamon dough, but it’s really fun to roll it out and press cookie cutters into it. We add whole cloves for decorations and detailing (I also use whole cloves in my homemade room scents), and use straws, toothpicks, or bamboo skewers to poke holes in the top for ornament hangers.

Bake the ornaments on an ungreased cookie sheet, in an oven set to its lowest setting, for two hours, then turn the oven off and leave the ornaments inside overnight. Don’t they make your house smell wonderful?

You can save these cinnamon dough ornaments from year to year, and if you store them in a small, airtight container then it will be years before their scent runs out (and when it does, simply place a few drops of essential oil on them for brand-new scent). My sneaky trick, however?

I compost them! Yes, I know that kid-made ornaments are supposed to be keepsakes, but it’s not as if I haven’t taken a million pictures of them, and frankly, I appreciate saving myself the trouble of packing and unpacking them every year.

So far, neither of my kids have noticed…so don’t YOU tell on me! 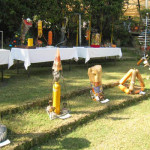