What better way to start making art out of your supposedly useless junk than to learn from our forefathers (and mothers)? Our wasteful generation, so used to disposing of whatever we are bored with or whose intended purpose has been fully utilized, is just now learning to maximize the resources we possess. Our grandparents, of course, had been recycling long before polar bears started shopping for floaties. Of course, they turned their Oats and Barley boxes into lampshades out of necessity, not green sensibilities.

The wonderful think about folk art is its utter versatility. You can use anything you own, broken or intact. You can super glue some broken plate pieces, old car keys, a car battery, ten randomly bent paper clips, and a torn washcloth together to make a diorama of the Palestinian-Israeli conflict.

Some of you may have the unfortunate affliction that causes everything in your house to break. This problem, commonly known as “Children” can turn everything you own, expensive or priceless, into useless junk. Of course, these debris can be collected and welded together into art that can awe your friends and strike fear into your progeny!

There has been a resurgence of this sort of behavior as of late. All around the world people are taking household items and squishing them together in a global mosaic of junk art. With them leading the way we can all test the limits of our creativity, ingenuity, and the patience of our significant others. (I will warn you now, ask before you start rummaging through their junk drawers. Sometimes a screw driver or Indian penny has more sentimental and/or monetary value than you realize.)

First up we have washed-up-on-the-beach junk art compliments of artist Shigeaki Higuchi; he shows us that, once again, the Japanese are a little ahead of us. Noone can quite outdo the Japanese in artistic weirdness. Of course, there is much to be learned from the crazies and crafties that populate the United States. While the Japanese can create strangeness from simplicity, Americans love to go all-out: ……In the first picture we see what looks like a hoe affixed to a pot top, an ice cube tray, a couple buttons, doorknobs all thrown together to make a rather adorable little man! The next, well, it looks like they took everything their grandma owned (including their heavy-duty television set) and crammed it together to make a display more delicious than all the hard-candy in the world! The first two pictures are done by the same Kansas City artist, Whimsical Rubbish. The following, which looks to be put on the terrorist watch-list, is a menacing combination of what makes our toy cars, cell phones, remote controls, and alarm clocks tick. Another piece by the same artist looks equally menacing; perhaps from an explosion-drama television series or an action movie featuring a stressful countdown to boom boom (which was avoided at the last minute). But hey, better to frighten his loved ones than to allow these materials to seep hazardous chemicals into the ground-water of a state with a small amount of Congressional representatives. He’s doing his part to turn his dangerous waste into threatening folk art, what about you? Instead of letting our slowly decaying electronics parts contaminate the environment they could be resting peacefully in our living rooms; stick some googly eyes on your non-rechargeable batteries and voila! Less mutant deer and more stuff to talk about at dinner parties!

Perhaps you are not yet convinced of the splendor that is junk art. Perhaps all of these beautiful and somewhat freaky creations have yet to tempt you to make masterpieces out of your old cord phones and cassette-tape collections of Debbie Harry remixes. Well; I submit to you a blast from the past, magnificent in its presentation and humble in its origins. This lord of junk was made out of all the tin foil, plastic wrap, cardboard boxes, and light bulbs the 1950s could toss away. James Hampton, the toiling crusader of crazy crafts received directions from god himself during its construction. The “Throne of the Third Heaven” is an inspiration for pack-rats the world over, it’s certainly the most holy creation I have ever seen.

No doubt all of these amazing feats of artistic junkery has inspired and energized you. It is time to pick up your glue guns, dust off your spot-welders, start up your sewing machines, and break out the old hammer and nails. To arms, to victory, to folk art! 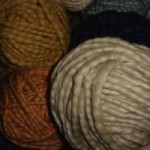 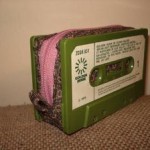