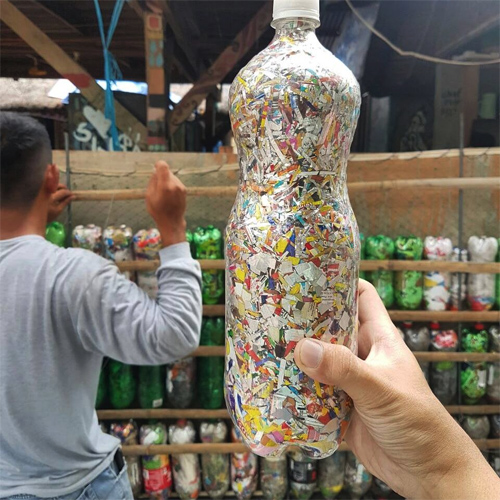 The Problem of Plastic Waste

We already knew that we have a problem with plastic waste. I mean, if the side of your nearest highway isn’t evidence enough, there’s also the entire Great Pacific Garbage Patch.

The pandemic, unfortunately, has just made the excessive use of plastic worse, as even those of us who try to avoid single-use plastics now have home stashes of everything from disposable masks and at-home COVID tests to water bottles and disinfecting wipes and pocket-sized bottles of hand sanitizer. The concept of plastic recycling is also more or less a myth, with the recyclability of most numbers being an outright lie, and even the recyclability of the easiest numbers, like #1 and #2, being very limited and with a definite (and short!) amount of viability before those plastics, too, are landfilled.

How Bottle Bricks Can Help

Bottle bricks are a way of both accepting the reality of plastic waste, and also using the physical fact of that waste for a specific purpose. Also called ecobricks, bottle bricks are PET plastic bottles stuffed with clean and dry used non-recyclable plastic. Each bottle brick is essentially a sanitary landfill just for this plastic.

Like a sanitary landfill, a bottle brick silos the waste inside it to keep it from polluting the surrounding ecosystem. This sequestered plastic waste will not make its way to the highway median or the Great Pacific Garbage Patch. It will not degrade into the microplastics that further pollute our waters, bloodstreams, and lungs.

Also like a sanitary landfill, a bottle brick compresses the plastic waste inside it to a specific density. A sanitary landfill partly uses this compression to allow for more waste storage in the allotted space. A bottle brick uses this compression to create reusable building blocks. When a bottle brick’s density meets the Global Ecobrick Alliance standard of between .33g/mL and .7g/mL, and is sealed with a screw-on lid, that bottle brick is strong enough to build a variety of structures. It’s also slightly flexible to better withstand force, and in the right conditions can be re-used nearly indefinitely.

You Can Create Bottle Bricks

A specific feature of the bottle brick is that it’s crafted using hands-on, manual labor. Another Global Ecobrick Alliance standard is that the “ecobrick must result in more plastic and carbon dioxide being subtracted from the biosphere than was added by the process of making it,” which rules out, at least currently, the idea of industrializing this process.

Instead, you can create bottle bricks yourself, by hand, using your own household waste. Source a PET plastic bottle, ideally one with a wide mouth, like a sports drink bottle. A narrow mouth is fine, though. Water bottles generally aren’t preferred, since their plastic walls are so flimsy. The bottles of Sparkling Ice that I accidentally let myself get addicted to during the pandemic, however, are perfect! Also source a tool that you can use to shove the plastic pieces into the bottle and compress them. A wooden spoon handle works well, if it reaches the bottom of your bottle.

You’ll devote a lot of time to filling this bottle with plastic waste and compressing that waste so you can stuff even more in. There is SO MUCH plastic waste around! There are bottle labels, candy wrappers, plastic film packaging, bread bag ties, stickers, plastic baggies, the clear plastic windows on envelopes, disposable straws, tape, buttons—just… everything. Everything is plastic.

Write the weight of each completed bottle brick on it in permanent marker. Then, either donate your bottle bricks to an ongoing project or use them in your own building project. Bottle bricks make great insulation–I have mine in mind for the chicken coop!–and you can use them instead of traditional bricks in a lot of brick-and-mortar applications. Here’s an example of bottle bricks used to build walls! Earthbenches are really popular, especially with groups. I also love the idea of raised garden bed walls, as walling off raised garden beds requires a lot of resources.

The main caveat is that projects in which you want your bottle bricks to remain visible should be reserved for indoor-only use. UV radiation will degrade the bottle’s plastic walls over time. If you use traditional earth building practices, such as utilizing local earth, straw, and sand as mortar, then part of the end-of-life process for your structure can even involve extracting your bottle bricks undamaged from the mortar and repurposing them.

Bottle bricking takes a ton of time, but it’s also a terrific group or community activity. Schools and camps, especially, are great places to establish a bottle bricking initiative. Their permanence means that they really can support a multi-year project. I love the keyhole garden project at this high school–it took over two years from start to finish, but it looks amazing and involved countless numbers of youth and community members in environmental activism.

Environmental activism that reduces my garbage volume AND insulates my chicken coop? Count me in! 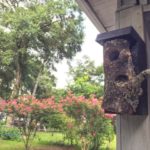 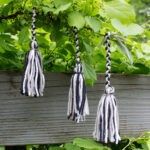