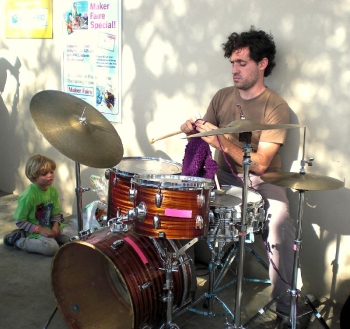 Name how many men you know who own power tools.

Name how many men you know who own a sewing machine.

You might be shaking your head thinking, “Well, that’s obvious.”… because I tailored my request to resonate with women.

If you’re a guy, you’re probably wondering, “What is this crazy bitch getting at?” That’s OK, because I’m banking on the fact that most of our readers are, in fact, the gentler sex.

Maker Faire blows most craft shows out of the water in terms of vendors and exhibits. With an estimated turnout of 65,000 attendees, and over 500 “makers” exhibiting, it was almost surreal to witness. Though giving my presentations occupied me for a couple hours, I was free to roam the rest of the weekend, and still didn’t get to see everything. One thing I observed almost doesn’t need to be said. Male makers were a minority in the crafty corners of the event, and though women had a definite presence in the technology arena, they still seemed largely outnumbered, especially in robotics and other mechanical applications.

That’s not to say, that some of the most memorable exhibits were crafts with a masculine touch, or technology with a feminine touch. It’s common to see inclusions of one into another, but rarely does anyone jump into the deep end (from the high dive, no less) of a genre that is biased towards the opposite gender with few intentions of conformity.

Pictured at the top is no ordinary drummer. Meet Corey Fogel on “Purl Drums”. Well, you probably won’t get to meet him, because he doesn’t really make eye contact with anyone as he haphazardly bangs the skins while knitting in garter stitch. Morose, endearing, and epically unapproachable, this is no gimmick or demonstration. The following is Corey’s bio from the Maker Faire site:

“I play drums, compose, and improvise in many musical and performance art capacities. As a soloist, I create long, surreal narratives of unorthodox sounds and awkward, vaguely familiar motions.”

Check out this video by Craft Stylish to see Corey in action. He even breaks character to give them an interview at the end. 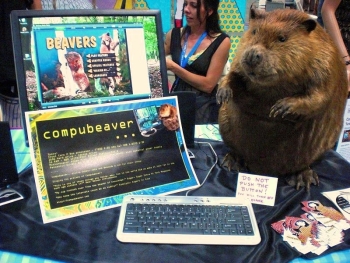 On the other end of this spectrum, we had the ladies from Your Psycho Girlfriend turning heads with their fashionable technology demo. One member, Kasey McMahon, is the brains behind Compubeaver, a CPU assembled within a taxidermied woodland creature. Inevitably, some veggie-heads may find this disgusting and offensive. The Instructable tutorial she has created, as well as other taxidermy projects like it, are lightning rods for heated debate. However, she did find the beaver at garage sale, and my opinion is that it would have suffered a worse fate in a landfill. Her intentions are to inspire awareness of our detachment from nature:

“I am interested in the way we interact with nature. As we become increasingly reliant on technology, we become disconnected from our natural environment. Nature then is a spectacle (ie holy crap, that’s a beaver!), an outing, a thing that is nonexistent in our daily lives.

There is also something intrinsically funny about putting a computer in a beaver. In fact, I find it difficult to think of a more ridiculous case housing for an office machine. All innuendos aside, what better creature to house the busiest of machines – the machine that has sped up our lives and made us captive to a constant flow of information.”

Stepping out of our predefined roles and comfort zones creates innovative thought. So, these aren’t merely a display of the pretty or functional things we make. They are abstract forms of creative expression that aim to speak on many levels in both obvious and absurd ways. When I ponder the kinds of art that hipsters will be remembered for, I think we’ll call it something like “Smart Ass Surrealism”.

What’s so amazing about Maker Faire and other indie events, websites, publications, and boutiques is how they celebrate our diverse cleverness. It’s a democracy of aesthetics and purpose, driven by the internet. In my next post for this series, I will discuss a related philosophy widely known as “open-source”. 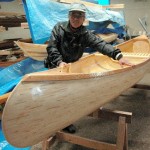