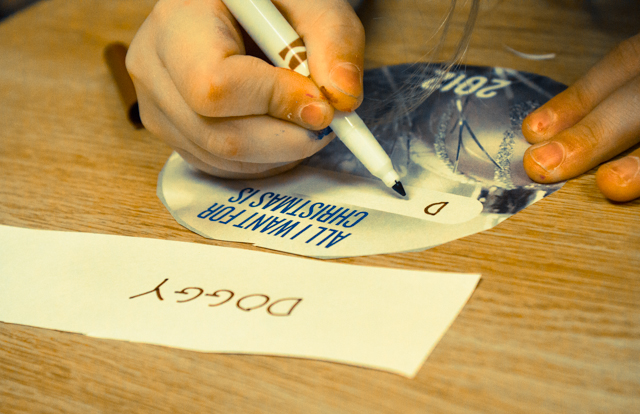 1. Trace a circle. Using the CD as a template, trace around both the outer and inner circles on paper of your choosing. If you’re using a cardboard record album cover, trace a circle of a similar size on the front side of a holiday-themed record album; this will allow you to fussy cut a nice image for the back side of your ornament. Cut the ornament out either before or after you’ve written on it.

2. Design your ornament. Although I think that overall, it’s much cuter to hand-draw the illustrations for this ornament (which can be whatever you want!), you’ll notice that our ornaments are clearly digitally designed; that’s because I organized this particular craft project at our homeschool group’s Christmas party, so I needed some production shortcuts.

Crucial elements to your design, whether hand-drawn or digital: a space for the kiddo to put her name (I forgot that–oops!), and the year.

3. Let the kid record her heart’s desire. Among the wishes of my daughters’ friends: costumes, a dog, a bunny house, a carving knife, an American Girl doll, a happy family, and a bow and 88 arrows. Yep, we’re an eclectic group!

4. Glue the ornament together. The wish list goes on the front of the CD (leaving a shiny back side to catch the light) and on the back of the cardboard record album cover (leaving a back side that shows part of the record’s graphics). My girls used Aleene’s Tacky Glue to glue together their own ornaments at home, but after years of hosting an ornament craft at this particular Christmas party, I know WAY better than to give those kids anything crazier than a glue stick to use, because I’m the one who has to clean up afterwards.

5. Make a hole to hang the ornament. To make a hole in the recycled CD ornament, drill through both it and the paper with a narrow drill bit. My kids, at six and eight, are able to drill their own ornaments, but for the party, I pre-drilled the CDs, and brought an awl to punch through the paper at the hole. To make a hole in the recycled record album cover ornament, punch through both the paper and cardboard with a narrow punch–a wider hole punch may not have the strength to punch through the thick cardboard.

6. Hang the ornament. The kids at the Christmas party threaded twine through the hole and tied it into a loop for hanging, but a conventional wire ornament hanger will work well, too.

For additional ways to re-use CDs this Christmas, check out this CD mosaic ornament tutorial. 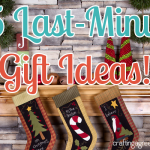