To make the dinosaurs, you will need:

1. Scrub, core, and halve the apples. I bought the smallest apples that I could find for this project, to avoid food waste. I also served a second bowl of grapes, apple slices, carrot sticks, and sweet red pepper slices, so that a kid hungry for a couple of grapes didn’t have to take an entire dinosaur.

2. Briefly dip the cut edge of the apple halves into lemon juice. Lemon juice keeps the cut apples from browning. Their brief dip doesn’t affect their flavor, at least to my palate, but I’ve heard that you can use pineapple juice for this, as well, which makes me think that any citrus juice may work.

3. Add toothpick halves to the apples. I used kitchen scissors to cut each toothpick in half first, so that I wouldn’t use so many. I inserted a toothpick at each end for the dinosaur’s head and tail, and then four more toothpicks along its spine for a spiky back.

4. Create the dinosaur. Each of my dinosaurs has a cheese cube for a head, a cheese cube cut in half to make a triangle for a tail, and four grape spikes.

5. Don’t let the kids eat the toothpicks. Five-to-eight-year-olds are reasonably bright, but before anyone touched the food, I made sure that they all heard me say, “There are toothpicks in the fruit dinosaurs. Take the toothpicks out before you eat them.” I generally keep a weather eye out during my kids’ parties, anyway, because I don’t want anyone choking to death on my watch, and mine was the only kid who put a toothpick in her mouth (of course), and she only did that just because she knew it would bug me (of course!).

We did have chocolate volcano cupcakes (iced with lava colored with India Tree food coloring) and orange sherbet after we sang “Happy Birthday,” but otherwise, nobody seemed to miss having crappy food around. Next up is my other kiddo’s dragon-themed ninth birthday party.

Anybody have any ideas for healthy dragon-themed party food? 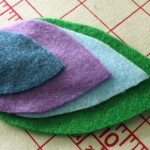 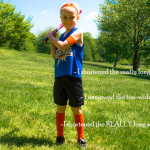