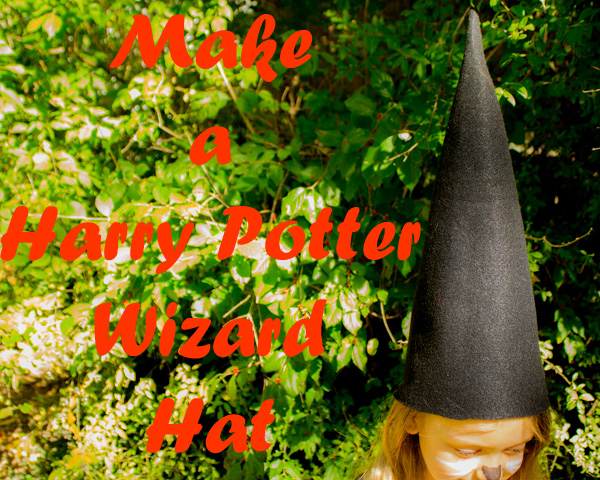 Your favorite wizard in training needs a hat, and it’s up to you, their favorite Muggle, to help them make one!

Gather up your favorite felt (both Eco-fi recycled felt and wool felt are good choices), some newspaper and duct tape, and hand-sewing supplies, and before your next costumed gathering, all wizards in attendance will be appropriately be-hatted.

2. Prepare the newspaper pattern piece. Duct tape four full newspaper pages together to make one HUGE square. Fold the square in half, then in half again–this way, you’ll only have to draw a quarter of your circle.

3. Create the wizard hat pattern. You can do the math, but if you want to make a nice, tall wizard hat–say of about 18 inches or so–then you’ll definitely end up with the head circumference that you need.

Cut out this pattern and unfold it once, so that you’re looking at a half circle.

4. Alter the wizard hat pattern to fit your head. Divide your head circumference in half, and add in the amount of one seam allowance (I used a full half-inch seam allowance for this hat, to accommodate the big ole wavy stitches of my nine-year-old.  Use a tape measure to measure out that distance from one fold, carefully following the curve of the circle, and mark it.

With a ruler, draw a line from that mark to the center of the folded edge, and cut along the line. You now have a pattern for a conical wizard hat, perfectly sized to fit your wizard’s head.

5a. Do you want to decorate your hat? My kiddo flatly refused to even consider adding stars to this particular hat (She’s technically a witch, and apparently I’m a fool for thinking that witches have stars on their hats), but if you want to add stars or other embellishments to YOUR hat, do so before you’ve sewed it into a cone.

6. Pin and sew. Form the felt into the shape of the conical wizard hat, and pin along the seam allowance. Hand-sew the hat closed using matching embroidery floss

; this is a great activity for a kid to do, since felt and embroidery floss are two of the most forgiving hand-sewing supplies that there are. And if you don’t have the sewing skills even of a nine-year-old, I’m betting that you could close this hat up just fine with the ample usage of hot glue.

Felt isn’t a slippy fabric, so this hat should sit just fine on your wizard’s head without a chin strap. If you’d like to make a hat with a brim, check out this witch hat tutorial. And if you’d like to make a hat completely from your recycling bin, check out the newspaper and cardboard witch hat that my other kid wore trick-or-treating last year–that thing lasted for MONTHS of dress-up play before we finally recycled it! 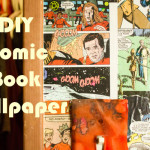 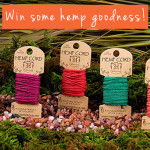