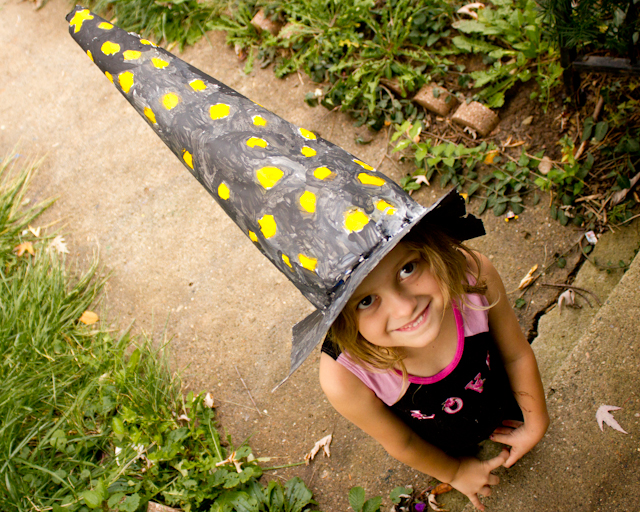 See how proud that kiddo looks? She and I made that witch’s hat, the exactly perfect Halloween costume accessory, out of recycled newspaper and cardboard (and a lot of tape!).The kiddo designed it (it needed to be very, VERY TALL!), painted it (it absolutely needed to be black with yellow polka dots, and a yellow star on top), and couldn’t be happier with it.

Considering that everything except for the tape and paint came from our recycling bin, and that this is EXACTLY the tall, polka-dotted hat that she had wanted, I’m declaring it a Halloween win. 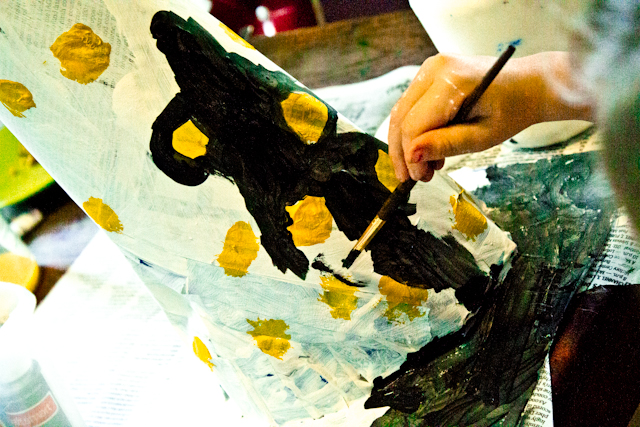 To make sure that the hat would fit well, I measured the circumference of my daughter’s head using jewelry wire, which held its shape while I traced it on half of an old cardboard record album cover (I dumpster dive for scratched records and then craft with them!). Any kind of wire would work just as well for a custom measurement, or a well-fitting baseball cap for a more generic measurement, or you could simply measure your head and then draw an oval to that measurement.

I cut the traced shape out of the cardboard, then tried it on the kiddo to make sure that it fit well. I re-measured the circumference of the cut-out, this time with regular measuring tape, and used that measurement as the base of a giant newspaper cone, formed out of several sheets of unfolded newspaper stacked on top of each other for sturdiness, and then rolled as if they were a single sheet of very thick paper.

Of course, if you don’t want your witch’s hat to LOOK like it’s made from newspaper, cardboard, and duct tape, then you’ll want to paint it. If I’d had black spray paint, I would have spray painted the entire hat, then let my kiddo paint her polka dots on top, but since we were working entirely with what we already had on hand, I had her first gesso the entire hat to give her an even base on which to paint, then handed over the bin of craft acrylics and the jar of paint brushes and let her bring her vision to life.

Is my kiddo’s witch hat perfect? Goodness, no! Does it look homemade, with all the flaws and bits of tape showing and uneven brush strokes that would match anyone’s stereotypical idea of a “homemade” object? You betcha! Will the occasional parent give me and my kid a disdainful look while we’re out trick-or-treating and their kid is dressed in a perfect, pricey, store-bought costume while my kid is wearing newspaper, paint, and a kid-sewn dress? Probably.

Will my kid notice? Nope! In her mind, her homemade witch costume will be the embodiment of perfection. It will be unique, since they simply don’t sell super-tall, yellow polka-dotted-with-a-star-on-top witch hats at the costume shop. It will be special, since she worked hard on her costume, instead of acting the passive consumer picking something out from a slew of identical choices from a store. And it will be a badge of pride, since she knows how highly our family values making things ourselves, acting with environmental responsibility, and saving our money for truly special purchases.

It also doesn’t hurt that in our neighborhood, people seem to give a little more candy to the kids in homemade costumes. My little witch is going to SCORE!

P.S. Want some more tips for a more eco-friendly (and cheaper!) Halloween? Check out other ways to avoid waste this Halloween. 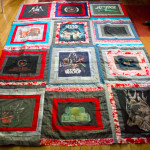 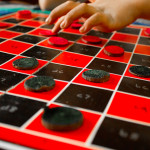