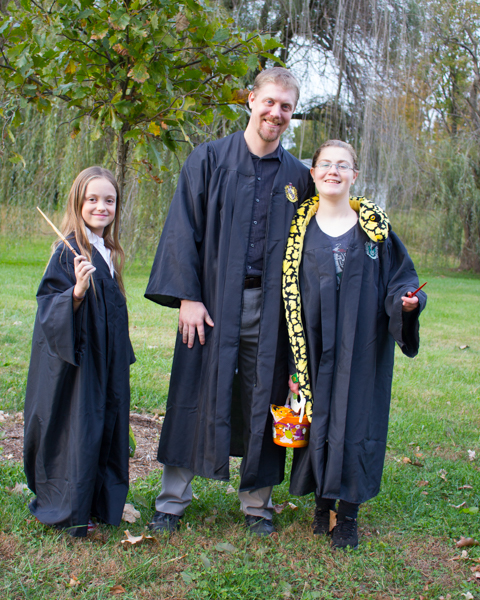 If you want to be a character from Harry Potter, you need a good Hogwarts robe. With some savvy thrifting, you can make a DIY Hogwarts robe in no time.

If you want to be a character from Harry Potter, you need yourself a good Hogwarts robe.

I mean, of course!

But how to obtain the perfect robe? You could buy a fairly cheap Hogwarts robe in a costume store, but then it would look cheap. You could buy a super-nice, super-expensive one, but then it would be super expensive. There are loads of tutorials for making your own, either from scratch or by altering existing patterns, but if you price out the fabric needed for making a good-looking, reasonably accurate Hogwarts robe yourself, you’ll realize that in that case, you might as well just buy one of those expensive ones, after all (and therefore, how on earth are the people making those robes, even the expensive ones, being paid a living wage? Sigh…).

You need a used graduation gown!

If you’ve got a month or more until you need your Hogwarts robe, check around your local thrift stores. We live in a college town that has a surplus store for random used university equipment, and every now and then they sell off a load of old black graduation gowns. Churches sometimes sell their worn-out choir robes. You NEVER know what’s going to show up at Goodwill.

If you’ve got a few days until your costume party, I’d suggest checking out ebay. I bought the graduation gowns used for this project there for about 10 bucks a gown, plus a refreshingly uninflated shipping charge.

Another option is, of course, your local Craigslist or Freecycle. People keep the most random stuff in their houses, just waiting for the perfect opportunity to offload it. Just last year, my MIL gave me my husband’s old high school graduation gown so that I could upcycle it into a dress for my kid, and Reader, he is almost 40 years old!

To make your Hogwarts robe the most accurate, you’ll also want an embroidered Hogwarts house patch; I bought patches for three of the four houses at Hot Topic, of all places, although my little Gryffindor is still without her patch. Apparently there are a lot of Gryffindors in our town! I was surprised that I couldn’t find any of the patches at my local fabric shop, especially since they carry Avengers iron-on patches, but oh, well. Maybe YOUR local fabric shop has some!

Since graduation gowns have generous sizing, so that a wide range will fit, you’ll only have to do any hemming if the gown’s sleeves cover your hands. Only my ten-year-old’s gown required this– 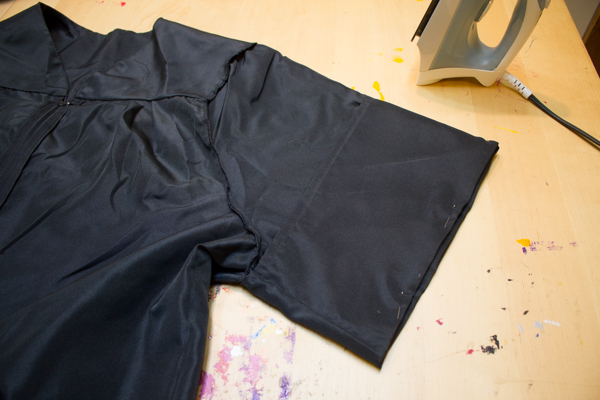 –and even then, I only basted it, because I know that sooner or later I’ll be re-hemming it; these kids grow like weeds!

Our Hogwarts house patches are iron-ons, but even so, I sewed them on with invisible thread in the spool and black thread in the bobbin: 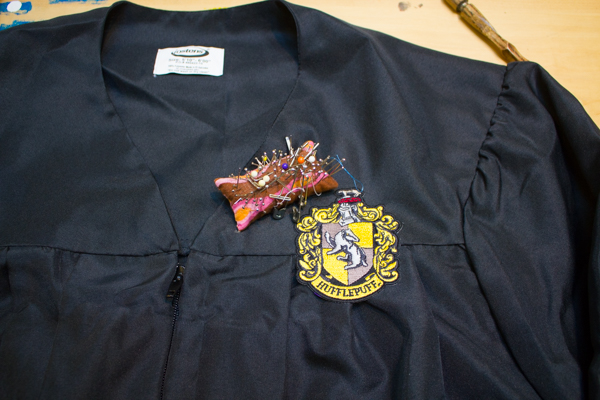 I didn’t even bother to research whether or not you could iron a patch onto synthetic fabric without something melting or something else not sticking, as honestly, I think it simply takes less time to just sew a patch on, and I think the end result looks and drapes better, as well.

When you’re dressing as a Hogwarts student, there are some extra accessories that you can take or leave.

I decided against pointy hats, because they’d never stay on throughout an entire night of trick-or-treating, but wands are a must, even though they’re just one more thing to carry. We went trick-or-treating on our university’s campus last night, and the kids were called upon to perform several spells, particularly the one that my ten-year-old invented, which calls for pointing your wand at someone and yelling “Trick or treat!” It makes candy magically appear!

Since every Hogwarts student may bring an owl, cat, rat, or toad, my kids decided that their familiars should be part of their costumes. Each kid picked a stuffed animal (my Slytherin daughter is allowed to bring a snake as her pet since she’s a Parselmouth, you know) and I attached it to her shoulder by means of safety pins. She also slicked back her hair, because Slytherin, but the rest of us wore our hair the way that we commonly do.

And there you go! Hemming, sewing, and dressing four people in these costumes took less than two hours, and I think they look better than some costumes that I’d spent days agonizing over.

The year that one kid wanted to be a “baby deer,” for instance? Ugh! 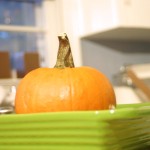 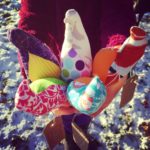