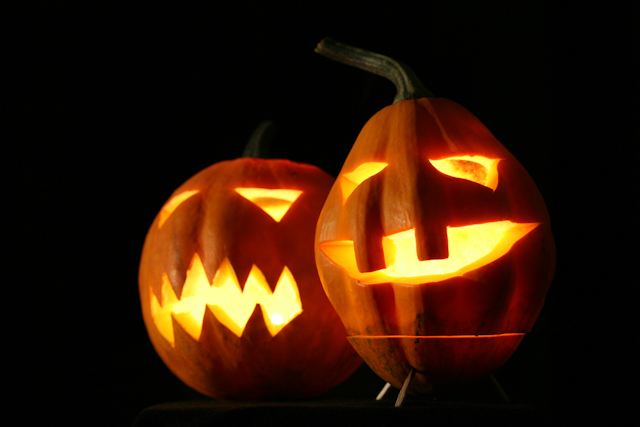 It’s not too late! Get inspired by one of the projects below, then pick up your carving knife (or hammer and nails, OR solar light and glass jar) and whip out the Jack-o-lantern of your dreams before Halloween night!

1. Pumpkin Coach: MUCH easier than a typical Jack-o-lantern, this pumpkin coach from Frugally Blonde is also much fancier! The wheels are made from bent wire, and although the coach doesn’t have to be painted silver, it would certainly be a lovely canvas for all your spare beads and baubles and glitter, because when you’re talking about royal coaches, then the fancier, the better.

2. Hammer-and-Nails Jack-o-Lantern: A terrific activity for preschoolers, pumpkin pounding involves giving a kid a hammer, some nails, and a pumpkin. When they’ve worn themselves out, pull the nails out and light up your brand-new polka-dotted Jack-o-lantern! To go extra hard-core, use a power drill on the pumpkin instead.

3. Lite Brite Jack-o-lantern: Got some old Lite Brite pegs wasting space out in the garage? Giver’s Log shows you how to make a light-up Lite Brite pumpkin.

4. Painted Pumpkins: Because it doesn’t take long for spray paint to dry, these painted pumpkins from Happy Mundane take far less time than carving, and as long as you mind your overspray, they’re less messy, too. If you’re already flush on pumpkin seeds, this is a great way to save a few pumpkins to scoop out later in the fall while keeping them looking decorative on your front porch.

5. Crayon Dripped Pumpkins: Another way to decorate a pumpkin without carving it is to grab a candle and some crayons and drip pretty, colorful wax all over it. Similar to encaustic crayon art on canvas, these crayon-dripped pumpkins from The Swede Records are great fun for kids and adults to make–and they use up broken crayons!

6. Solar Light Jack-o-Lantern: Let’s say that you don’t even HAVE a pumpkin this year–do you have a solar light, perhaps one of those lights that line walkways? If you have that, and a glass jar, and some masking tape, then you’re 90% of the way to a green and clean solar light Jack-o-lantern. 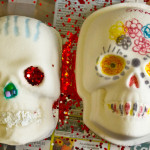 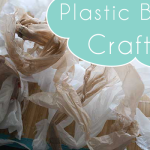