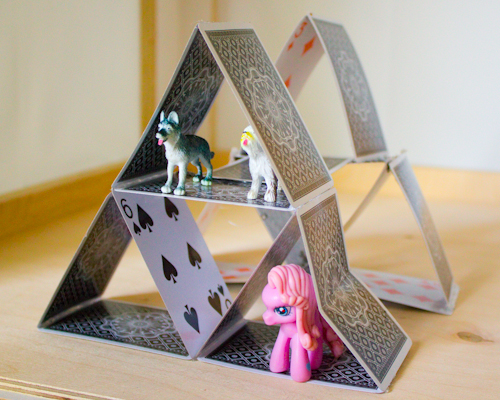 Do you remember the episode of The Brady Bunch in which the girls and the boys can’t decide what to buy with all the trading stamps that they’ve collected (ah, 70s grocery shopping!), and so they have a contest to decide by building a giant house of cards?

Never mind that the girls win and thus should get to buy their choice, a sewing machine, instead of the boys’ rowboat (also an awesome choice), but they eventually decide to compromise by instead buying a color TV(!!!)–my point is that the card house that those six children supposedly built was huge and only fell down when the dog knocked it over, whereas I can’t reliably stand four cards up together to build so much as a box without it all collapsing as soon as I take my hand away.

Well, forget that! There is no reason in this world why I have to have the fine motor skills and steadiness of nerve to build a free-standing house of cards, not when I also happen to own a hot glue gun. Go dig around in your junk drawer and find all those decks of playing cards that have the missing cards, because I’m about to show you how to recycle playing cards into 3D houses and other gravity-defying structures suitable for displaying on coffee tables and amazing dinner party guests, etc.

First, collect a goodly amount of beat-up playing cards. Just as you repurpose all sorts of game pieces, there’s no need to break up a perfectly good new deck for this, when there are plenty of decks out in the world missing a few cards, or having a few cards that are bent or that the dog chewed up. If you are the kind of superhero who has absolutely no trashed decks of playing cards in your house, then ask a buddy or check with freecycle–trust me, those beat-up playing cards are out there somewhere.

You’ll also need your hot glue gun, which is the secret to these playing card houses. While I’m sure that you can use anything from white PVC glue to clear epoxy glue and get the same result, hot glue dries nearly invisible, so that your house of cards will look carefully stacked instead of sneakily adhered, and it cures quickly, so that you only have to hold your cards together in their impossible placement for a few seconds before the glue catches them.

The most traditional house of cards consists of nothing but triangles. Build the base first, then stack your pyramid as high as you want for an amazing house of cards. 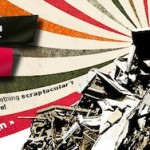 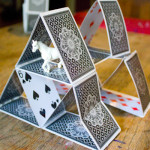