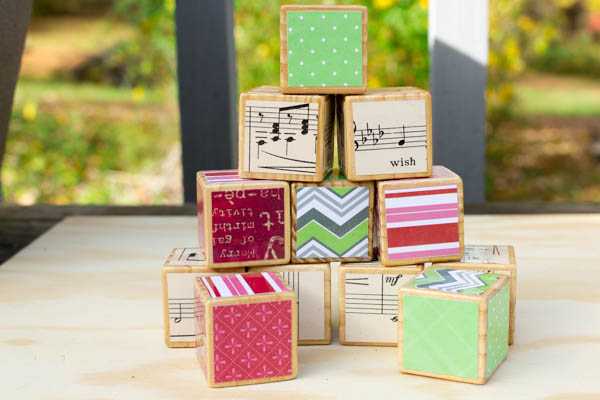 Decoupage alphabet blocks that your kids no longer play with to give them a new life. They make excellent holiday decorations! 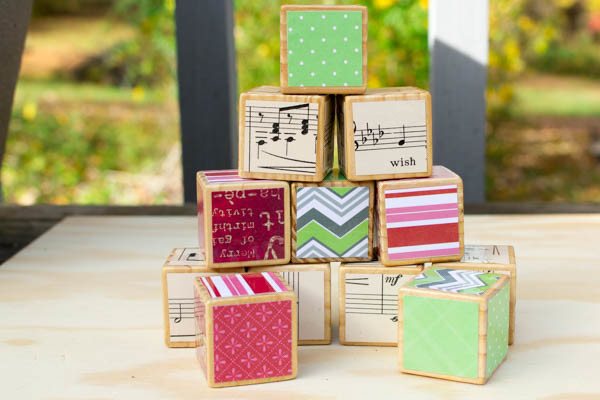 You probably know by now that I LOVE to make things out of building blocks. We’ve got a huge stash that I’ve gathered over the years, and now that my older kids are starting to lose interest in building giant block worlds that take over the entire family room (sniff…), I’m starting to separate the heirlooms from the blocks that can be upcycled.

These alphabet blocks are the latter. I can tell you exactly when I received them–on the occasion of my older daughter’s birth, from my husband’s boss–and they’ve definitely been well-loved and often played with, but they aren’t heirlooms.

What they ARE, however, are cubes. They’re smooth and varnished. They’re a little beat-up, enough to show the life in them, but they’re not damaged.

They are perfect for decoupage!

These decoupaged alphabet blocks make excellent holiday decorations–I’ll be using mine for Christmas decorating. They’re also easy to monogram and personalize, and would make a great new-baby present to display in the baby’s nursery.

alphabet blocks. Unlike in a previous tute, when I covered the entire block in paper, I’m deliberately leaving an unpapered frame around each face of each block, and that’s why for this tute, alphabet blocks work the best. Alphabet blocks like these are already sealed and varnished, so the wood already looks nice. The images are centered, so you can easily cover them with your own paper. And they’re cubes, which will make the measuring that much easier.

paper and paper cutter. For these particular blocks, I used a combination of stash scrapbook paper and vintage sheet music, but any paper that can handle glue and polyurethane should work fine. Some ink on vintage paper may bleed, however, so test it out first if you’re unsure. Your measurements need to be really accurate on these, so I like to use a paper cutter rather than just scissors.

. You can use any kind of white glue to stick the papers to the blocks, but you will need to seal the final result in several layers of your preferred brand of polyurethane sealant. Polyurethane isn’t an especially eco-friendly product, but it’s by far the best product for this particular upcycling project. Just make sure to choose a water-based brand. 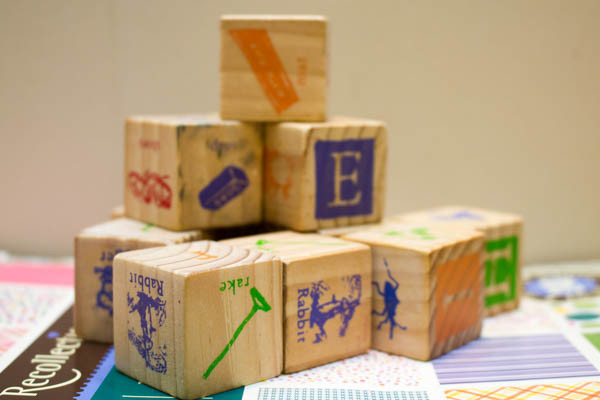 1. Clean the blocks. I wipe the blocks down with the homemade vinegar cleaning solution that I use for everything around my house. I’ll scrub at stains, but I won’t try to repair any scratches or dings–I like to see evidence of an object’s previous life.

2. Cut paper to size. You want to cut your paper squares slightly smaller than the block’s face, so that you’ll have that nice frame around each square, but you want them large enough to cover the image on each face. These blocks are 1.25″ square on each face, so I cut each paper piece exactly 1″. 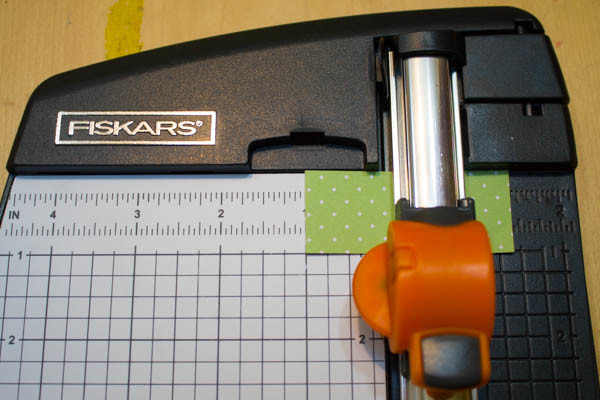 3. Stick the paper to the blocks. Put little dabs of white glue all over the back of the paper, then center it on the block’s face. The white glue’s liquidity will allow you to make minor adjustments to the paper until it looks perfectly centered. 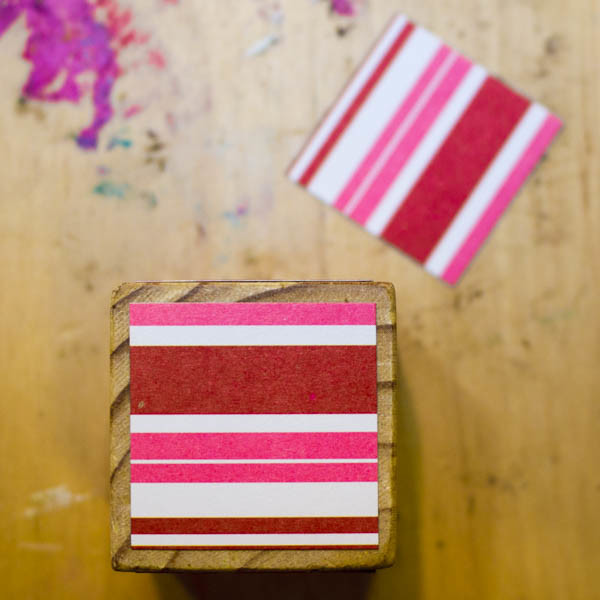 4. Seal the blocks. Use a small paintbrush to paint polyurethane sealant over the top 3/4 of the block, then let it dry, flip it over, and paint the other side, overlapping the previous layer of polyurethane. After that layer dries, flip the block only 90 degrees, then repeat to make two more layers that overlap going the other way.

Overall, you’ll need six coats of polyurethane at the minimum, and I think my blocks look best with 8-10 coats.

I think I like this project so much because, unlike with many other projects that upcycle old building blocks, these blocks ARE still playable. The polyurethane seals them so that a kid can certainly stack them up and knock them over, but they also look lovely simply stacked on a coffee table or arranged on a mantlepiece.

And you’re the only one who has to know that underneath it all is your older daughter’s oldest toy. 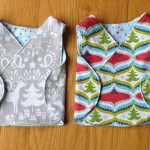 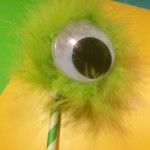