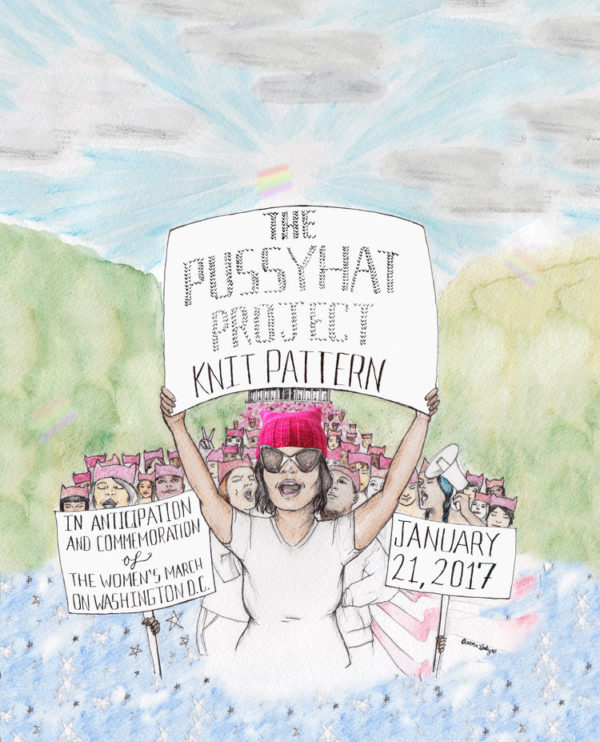 Marchers and supporters for the Women’s March on Washington, D.C., on January 21, 2017, have inspired an international craftivist movement called The Pussyhat Project.

The mission of The Pussyhat Project, which was co-founded by Krista Suh and Jayna Zweiman, is to craft a visual statement, both for the marchers in Washington, D.C., and for their supporters around the world. The iconography of the handcrafted hat, its pink colors, and its construction that gives it cat-like ears when worn are meant to call to mind conventional female tropes, and thereby highlight the specifically female perspective of the protest.

Although far-flung supporters are, of course, encouraged to make and wear their own pussyhats, a primary goal of the movement is to equip the participants in the Women’s March on Washington, D.C., with the hats, so creating hats to donate is also encouraged. The hats have to be at the D.C.-area collection point by January 14, 2017, to have them ready in time to hand out, but it’s also possible to find a local collection point, or to connect in person with local participants who plan to attend the march.

If you’d like to craft your own pussyhat, you’re welcome to use any pattern or construction method that you’d like, as long as the hat is pink and has cat ears. There are loads of free patterns online, ranging from ones perfect for the person who’s picking up knitting needles for the first time just for this occasion, to elaborate and individualized works of art. I plan to make the Big Loop Yarn pattern, which calls for super-chunky yarn and therefore is able to be completed in about half an hour. For a sewn version, check out this pattern that calls for polar fleece.

Whether you’re in Washington, D.C., on January 21, 2017, or you’re watching the news coverage, keep an eye out for a sea of pink hats and see how craftivism can give an identity to a national movement.