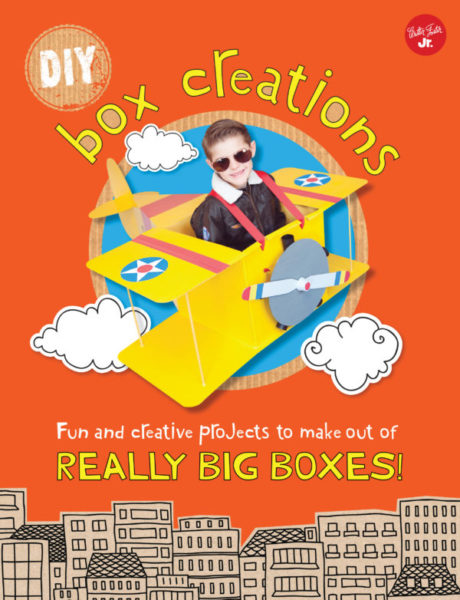 `As you have seen many times here before, my kids and I love big boxes. Mostly I just let them play with them, making their own things from their own imaginations, but sometimes we work together to turn a big box into something specific, like a giant gingerbread house for a kid’s candy-themed birthday party, for instance.

DIY Box Creations (which I received for free from a publicist), by Courtney Sanchez, has twelve step-by-step tutorials to turn a big box into something specific, with creations ranging from pretend play scenery to kids’ costume pieces to furniture. The projects are all elaborate enough to make them items that adults create and provide for children, although there are places within each tutorial where a child could do some painting or other embellishing.

My favorite of the projects are the ones that essentially create temporary furniture for the playroom. The train table project is one that could thrill a toddler who’s recently encountered a train table in a library or bookstore, and could easily be taken apart and recycled when that toddler moves on to pretend kitchens, instead. Other large structures, such as the rocket ship or sailboat, could easily excite a kid’s indoor play in gloomy weather, and you could take comfort in the knowledge that all the space that it takes up is only temporary, because it’s only cardboard.

Other useful projects in the book are ones that use big boxes to make components for dress-up play–we’re already thinking about Halloween in our family! Both the airplane and hot air balloon projects include shoulder straps so that a kid can carry them around as she pretends to pilot them; add a leather jacket and a pair of goggles, and your kid is ready to trick-or-treat! Similar projects, such as the racecar and sailboat, could be modified to work in the same way.

Need a big box to craft with? My kids and I goof around with big boxes all the time, and we suggest that you contact your local food pantry to find some. Every box that you take off a food pantry’s hands is a box that a volunteer doesn’t have to break down and haul out to the recycling bin. Other possible box sourcing locations are smaller or independent appliance or furniture stores (I was rudely answered when I queried Lowe’s about big boxes, for instance, but was happily given some by Rural King), your local recycling center, or Freecycle. 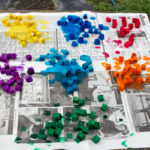 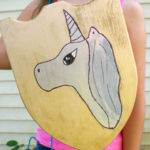