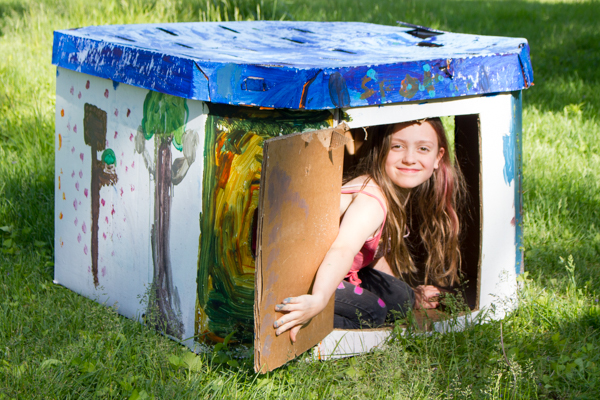 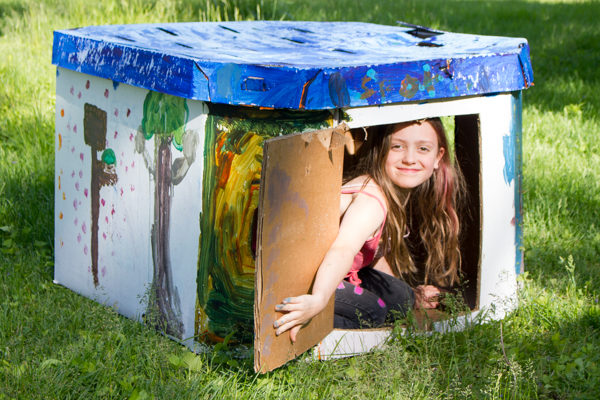 I think that giant boxes are one of the most important things for a kid to have as a plaything. Kids love super tiny toys, and they love super BIG toys, especially ones as versatile as a cardboard box.

Consider a giant box as an entire environment that the kid herself can manipulate–how often does a kid really get to do that? She can move it herself, paint it inside and out, cut it with a box knife, tape and glue things to it, and then she can play in it for as long as she wants.

And unlike most of her other toys, which you have to find space for in her crowded bedroom, when she’s done with her giant box, or it’s gotten too battered, or you just can’t stand looking at it anymore, you can recycle it, compost it, mulch it, upcycle it–basically, you can get rid of it, guilt-free!

Where to Find a Giant Box

grocery store. The boxes that my kids love the most come originally from the grocery store. You know those giant cardboard bins that you find pumpkins or watermelons or big bags of potatoes in? That’s the kind of box that we’ve got here, with the bottom stuck on top to make a roof.

big-box store. If a store sells large appliances or big stuff of any kind, then they also have plenty of big boxes. We have had mixed luck in actually getting our hands on these giant boxes, however–I phoned our local Lowe’s a few years ago to ask if I could have a giant refrigerator box, only to be informed (rudely, because of COURSE) that they immediately break down and bale all of their cardboard. Don’t worry about their bad karma, though, because when we still had a land-line, our phone number was one digit off from Lowe’s and we used to get people calling us for them ALL THE TIME. We would take the calls, I mean obviously, and were absolutely the worst employees that these hapless callers had ever spoken to, so there, Lowe’s. Teach you to be unhelpful to ME!

food pantry. My kids and I volunteer at our local food pantry weekly, and this is where we get all of our boxes. It’s for sure worth a call to your own food pantry to see what they do with their own giant boxes, and how you can help them get rid of them. For bonus points, bring some cash to donate to the pantry when you go to pick up your big box.

Freecycle. Especially because you’ll be picking the box up so that they don’t have to deal with it themselves, total strangers may well be happy to pass off their big ole’ IKEA and Sears boxes to you.

How to Prep Your Giant Box

If you got the box somewhere dicey, you may want to leave it out in your garage or under a tarp in your yard for a couple of days–no need to be careless where cockroaches and bedbugs are concerned!

If you’ve got little kids, check that there are no huge staples with their sharp points sticking out of the box. A lot of manufacturers use these instead of glue to hold their boxes together.

If your kid wants to paint her box but it’s already pretty colorful, don’t be afraid of giving it a couple of coats of a water-based primer.

If your kid already knows exactly what she wants to make the box into first, you can go ahead and cut out any doors, windows, or other required bits with a box knife: 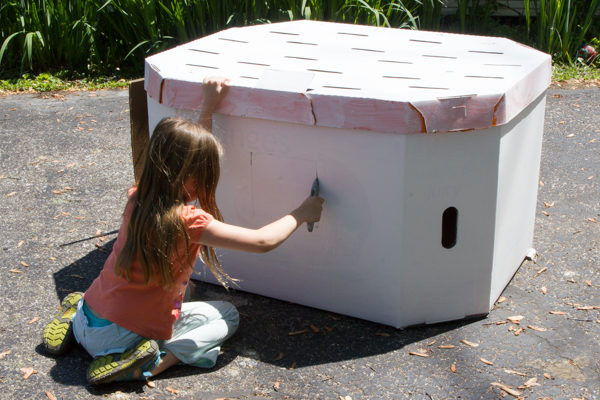 Some Fun Things to Do with a Giant Box

party activity. I have provided a giant box and plenty of paints and brushes at almost every kid’s birthday party that I have hosted, and it is always, ALWAYS a huge hit. Even nine-year-olds love it. Even ten-year-olds love it! It’s a great collaborative, creative activity, and the birthday girl can enjoy playing in her friend-decorated castle long after the party is over. 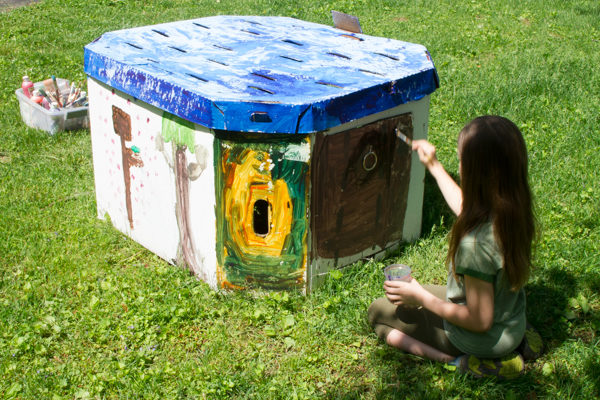 life-sized gingerbread house. We also used this as a party activity, but it would make a super cute Christmas decoration, or just a fun activity for a kid to do during winter break.

cave of stars. Normally, I like kids to be allowed to make their own giant box creations, but if your kid was on board, she could easily help you make this, and to be fair, it DOES look magical!

giant marble painting. If you’ve got a group of kids, here is an awesome collaborative art activity for them.

cardboard roads and railroad tracks. A flat box, or even just a giant piece of cardboard, can easily replace those pricey and space-wasting train tables, and you can make them completely different every time you get a new piece of cardboard!

crawl-through maze. In this pic, it’s clear that the maze is made from same-sized pieces of cardboard, but you could totally do this just with giant boxes.

What to Do When You’re Done

Of course you can recycle your giant cardboard box, but you can also think outside the box (boom!) for other uses.

And that giant cardboard box fort? After keeping it for a month, playing in it with friends, a sister, and cats, painting it over more than once, letting it sit out in the rain more than once, the kid finally tired of it. Conveniently, that very afternoon I cleared out an especially brambly section of ground between our old general store and the irises, and needed something to kill the brambles and poison ivy off permanently. 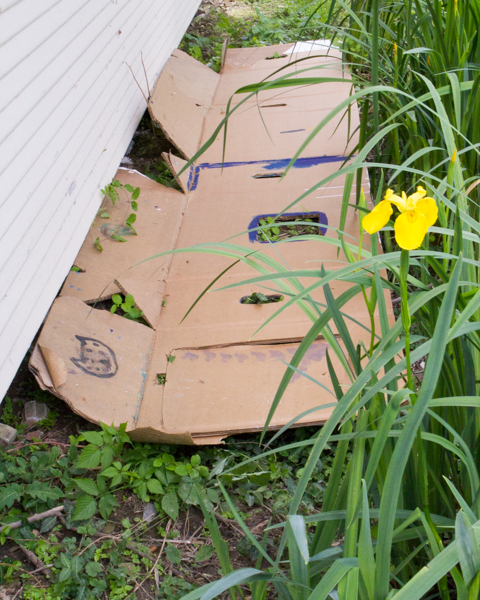 I think that will do nicely! 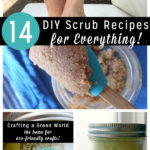 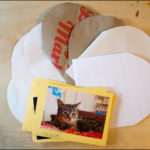