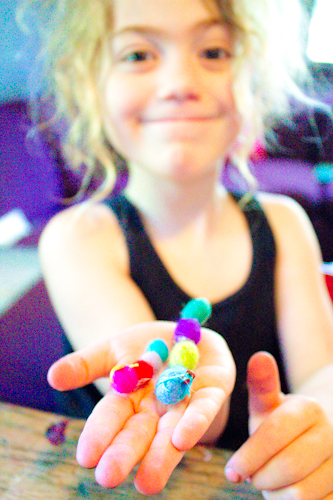 My kiddos, at the ripe old ages of five and six, are pretty advanced crafters. They’re handy with a hot glue gun and a can of spray paint, they made all their own Christmas cards last year, and my older daughter made a killing at my craft fair booth one month with a set-up of her own invention entitled “Willow’s Fancy Names”–give her a buck, and she’d write your name fancy for you. She made practically as much money as I did!

Needless to say, my kids have high standards. They’re unimpressed by your average, ordinary, string a few beads and stick on a few stickers children’s craft kits. Instead, they prefer unusual projects that they haven’t already done a million times, with interesting materials that they don’t necessarily get to work with every day, instructions that are do-able and somewhat free-form, and a result that looks good and does what it’s supposed to do.

As the Momma, I’m the one who wants their craft materials to be safe and natural, healthy for their intellect and their creativity. I prefer production methods and other business practices that are eco-friendly, and if a kit helps my kid make something that is extra-super-cute, then so much the better.

These are the criteria by which we evaluated the Artterro craft kits that the company sent my kiddos for free (blogging doesn’t pay a ton, but it does get you the occasional free craft kit to blog about). Read on to see how we liked them:

My daughters each got their choice of their own craft kit, and there are a lot of interesting, unusual selections from which to pick. I wanted the girls to make their own choice, so I worked very hard not to steer Willow toward the Paint with Wool kit, although I really want to try out needle felting. Intrigued by the photos of the finished products, Willow instead chose the Wool Felt Bugs kit–it’s rated for kids ages 7 and up, so it’s right on target for her. I knew that Sydney’s choice of the Bubble Wands kit, rated for kids ages 8 and up, would be beyond her abilities as a just-turned-fiver, so I planned from the beginning to give her a lot of help.

If you’re buying your Artterro kits from a store, the packaging will tell you what you, yourself, will need to provide. If you’re buying kits online, however, you can see a photo of what your kit contains, and then make an educated guess about what else you will need. I was pleased to see that Will’s wool felt bugs kit came with hand-sewing needles, since I don’t do enough hand-sewing to reliably know where to find mine in a pinch with an excited girl at my heels. You also need to use your own glue for the wool felt bugs, which, frankly, I prefer, because I’m a glue nerd and Will likes her hot glue. I didn’t have the foresight to know ahead of time that I’d probably want wire cutters and pliers to use with Syd’s bubble wand kit, but those are items that I have easily at hand.

As far as the actually crafting goes–well, it’s delightful, honestly. Both girls were thrilled about the contents of their kits. Before Willow made her wool felt bugs, she spent close to an hour simply playing with the wool felt spheres and ellipses that her kit contained. Sydney did need a little of the help that I’d expected to provide, but copper wire is very malleable, and she really only needed me to help her get the wire snugly attached to its bubble wand stick, and wrapped around the marbles just the way she wanted it to.

Both kits were also just as free-form in their completion as either the girls or I could want. Will’s bugs looked stinkin’ adorable whether she made them as crawly caterpillars or hard-shelled beetles or butterflies with ribbon wings, and Syd’s bubble wands made bubbles no matter how they were shaped.

I was pleased to see a sticker on each craft kit noting that it had been assembled by a worker with Goodwill Industries in Wisconsin. American-made products are my own particular ethical emphasis, so it’s important to me that the craft kit’s box is also made in Wisconsin, out of 100% post-consumer waste, and the printed materials are done in Oregon, using recycled paper and vegetable-based inks. Mind you, our boxes never actually made it to the recycling bin–Willow read on the package that the box is shaped the way that it is so that you can use it as a picture frame, and she and Sydney immediately had me cut out paper to size so that they could draw and frame their own artwork. Overall, the kit packaging is pretty minimal, with one clear plastic bag left over that I don’t mind using to store my own craft supplies in later.

In other words, our Artterro kits were a complete hit with the little people, and I enjoyed them, too. But my favorite part is that Artterro is going to give a kit to you, too!

Well, one of you, at least. Stay tuned, because tomorrow on Crafting a Green World I’ll be setting up a giveaway that will let one lucky winner receive one Artterro craft kit of their very own. Don’t forget to come back tomorrow, because you can’t win if you don’t play!

[I received free products from Artterro, because I can’t review it if my kids haven’t had a chance to see if they can wreck it.] 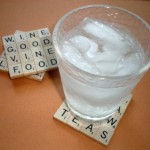