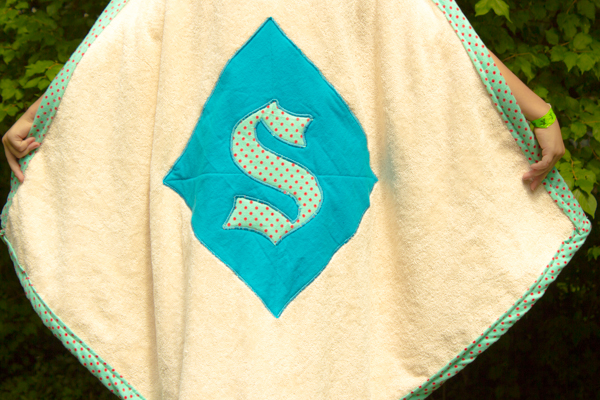 1. Take your kiddo’s measurements, and figure out yardage. First, measure your kiddo’s height–look how she’s grown! Your hooded towel will be in the shape of a square turned diagonally, so this height measurement will be the diagonal length of the square. To calculate the length of each side of the square, use the Pythagorean theorem, in which c equals the diagonal and both a and b equal the lengths of the other two sides of the right triangles made from the square with that diagonal.

No, you don’t want to do that math? Fine, use this square calculator, but don’t forget that your geometry teacher TOLD you you’d need the Pythagorean theorem one day!

Using the Pythagorean theorem, and then rounding up to the next inch, I discovered that each side of my square needed to be 36″ (do not include a seam allowance here or anywhere else on this project); this was a yay, because it meant that I could sew the entire hooded towel for my seven-year-old from one yard of organic natural terrycloth.

2. Make homemade bias tape. Cut printed or undyed organic flannel on the bias at a width of 4″, then make bias tape out of it.

You will need enough bias tape to cover the perimeter of your square and the base of your triangle.

6. Applique the hooded towel. Your hooded towel is perfectly serviceable at this point, but it might still need some personality. You can cut a monogram, or really anything that you wish, out of flannel, center it onto the back of the hooded towel, and applique it on using your machine’s satin stitch.

NOW it’s got some personality!

Organic Cotton Plus gave me this organic natural terrycloth, because I can’t write about a fabric until I’ve appliqued a superhero monogram onto it! 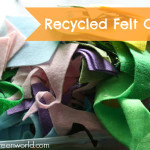 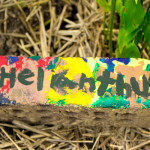