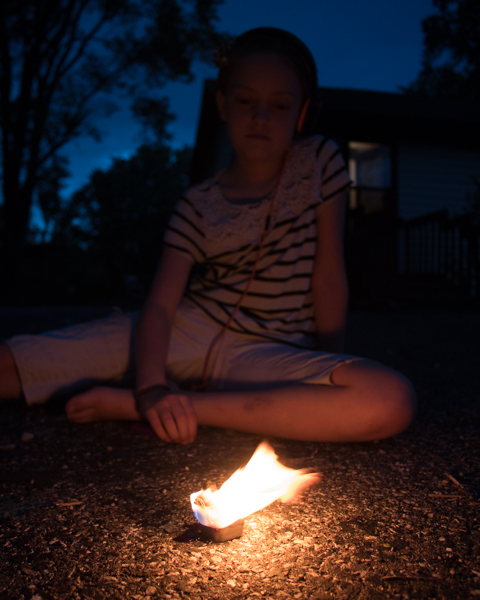 Want your kids to be calm and confident in the outdoors?

Then you’ve got to teach them all the skills that LET them be calm and confident!

In Girl Scouts, I work with all kinds of girls, with all kinds of different life experiences. Some girls are avid campers already; some girls are afraid to leave their houses in the summer because of bugs. I’m not around to bully terrified children out into the woods, but I am there to give them positive outdoor experiences that let them feel capable in all kinds of natural environments. When they’re happy and confident outside, peeing in the woods and sleeping in a tent will come in time.

But if there is a kid who’s scared of the outdoors, who doesn’t like the feeling of grass on her feet or dirt on her hands, then I have two words that are my magic words in turning all of that around:

Kids love campfires. Kids love s’mores. And when they’re sitting around that campfire, nomming up s’mores as fast as they can make them, they’re also outside. At night. With the bugs. And the darkness. And the sticks. And they’re eating something delicious and poking at the fire, so it all adds up to a great experience.

Sneak in a lesson on how to build and maintain a campfire, and there you go–a happy kid who’s that much more confident outside, and is one step closer to an enjoyable camping experience.

These kid-made fire starters are another sure-fire, super fun thing. Kids LOVE playing with melted wax. Seriously, they love it. I’ve never met a kid who doesn’t. And kids will find it very tempting to learn how to start a campfire, even if they’re scared of camping and scared of sticks and scared of fire, if they get to use a fire starter that they made themselves while playing with melted wax. Want to try it for yourself? Here’s all that you’ll need: 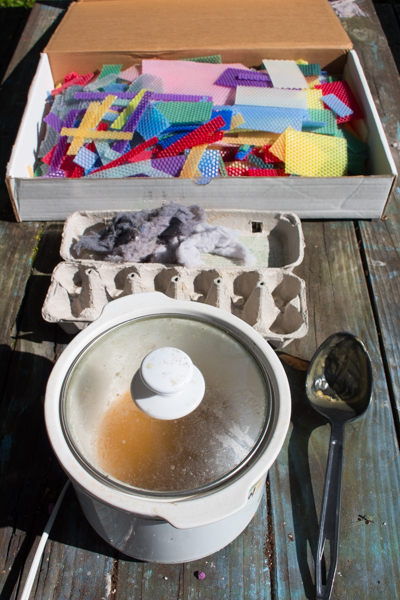 cardboard egg cartons. Don’t buy the styrofoam egg cartons, obviously! You just need the bottom half with the cups in it, so you might even be able to score post-Easter by finding a friend who bought an entire flat of eggs and will give you that large-scale bottom piece with lots and lots of egg cups on it.

dryer lint. The fire starters work best with cotton-only dryer lint, but who can manage that?!? We’ve got a lot of cotton in our laundry, sure, but we’ve also got loads of fleece blankets, and when we made the first batch of fire starters since we got our dog, I noticed that our dryer lint was absolutely packed with dog hair. Lovely, right? It might make a difference if you used these in your indoor fireplace–I mean, who doesn’t adore the smell of burning hair?–but these particular fire starters are intended for campfires, so a few non-natural fibers are nbd.

wax. Don’t buy paraffin for this project, even if that’s what you used back when you, yourself were a little Girl Scout making fire starters with her troop. Instead, use up all of your candle stubs and scraps. I make a LOT of rolled beeswax candles, so you can see in my photos that my kiddo is using scraps from those projects. We have the most colorful fire starters in the service unit!

crock pot or double-boiler. I know that all I do is harp on how much you need a crafts-only crock pot, but Friends–this crock pot that I’m using was $4.50 at Goodwill, and I’ve used it for years for all of my wax projects, and I couldn’t be happier with it.

1. Stuff the bottom of an egg carton with dryer lint. Cut off the lid of the carton, and then stuff the cups full of lint, pushing it down to make sure that each cup will really hold a lot. This is your flammable material, so you want enough to really give your fledgling fire a lift! 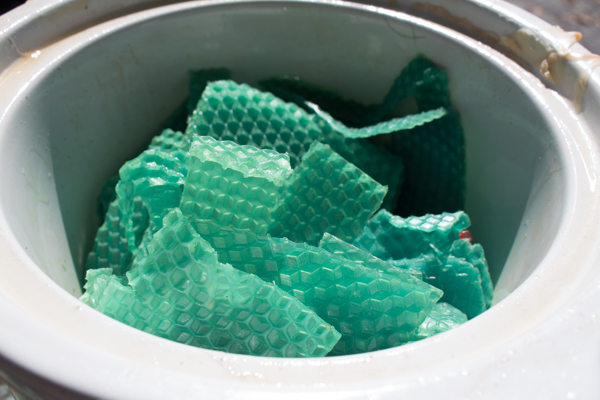 –then pours it into each of the egg cups to cover the lint. We do this outside, because it IS messy. The crock pot bowl is a little unwieldy, and yes, she struggles some and loses some wax, but pouring from unwieldy containers is part of life, and wax is cheap.

You never end up melting as much wax as you think you do, so the kiddo did end up melting more wax for these particular fire starters–in a different color, because of course. I like the kids to cover the lint completely with wax, because I think it both looks and IS cleaner, and the wax is what gives your fire starter longevity. Not enough wax, and your lint will flare and then go out after a couple of seconds. You might as well have not even gone to the trouble of making a fire starter, if you’re just going to get five seconds of flame out of it. 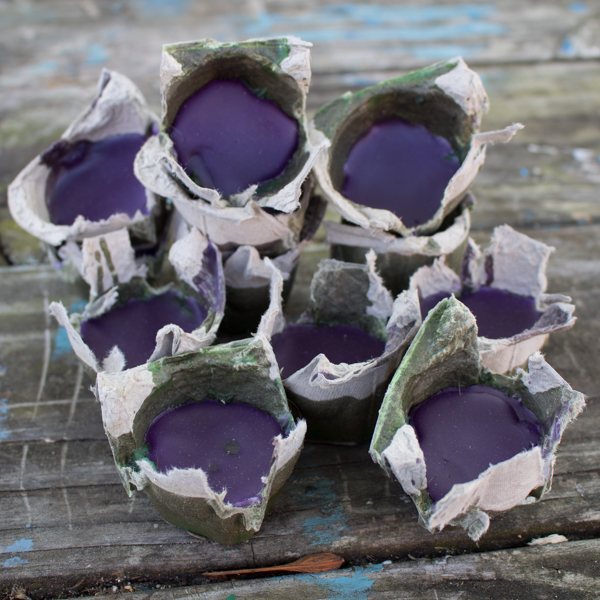 3. Cut the egg cartons apart. I like the kids to cut the egg cartons into single cups. The fire should start small, so a single cup should be enough to get it going. If it’s not, no harm, because the kid can just set it up again and light a new one. You learn the most by failing!

I wanted to show you how you can use these to start an actual campfire, but it was raining the night that I wanted to do the photo shoot, so instead I made the kid come and sit out on the driveway with me and just light the fire starter. So in that top photo, where the fire starter is blazing away? It’s blazing that strongly IN THE RAIN. You could hear it sizzling as the rain drops hit it, but nevertheless, it burned happily for almost ten minutes. In the rain.

These fire starters make good gifts for campers or those with a fireplace (check out how to package them with a cute, burnable bow!), but once you’ve tried them with your outdoor campfire, you will no longer be that jerk who has to use lighter fluid to get a good blaze going.

And you can thank your kid for that! 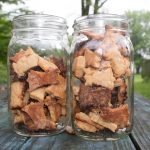 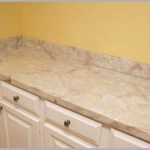