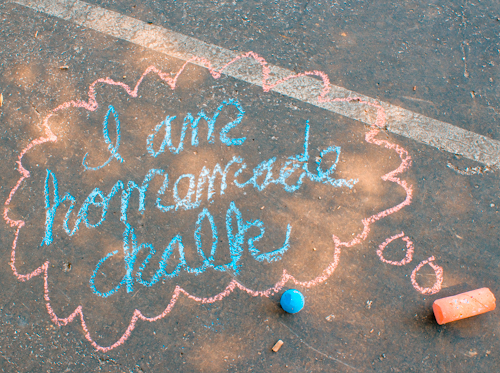 I admit free and clear that store-bought sidewalk chalk is certainly no big expense. You can buy it in any big-box store for what, a buck?

Of course, you don’t exactly know all that’s in that one-buck sidewalk chalk, nor do you know the conditions of the workers who manufactured it. That aside, however, there’s also just something to be said for fostering the D.I.Y. ethic in your life. When you make homemade sidewalk chalk, you can make it any color you want, using your own pigment that you’re comfortable with. You can make it practically any shape you want, using anything from muffin tins to toilet paper rolls. And if you’re making your chalk for a kiddo, well, then that kiddo can actually practically make this chalk recipe all by herself, and then that kiddo will grow up knowing one more thing she can make for herself instead of having to buy.

So gather up your toilet paper rolls and your muffin tins, because this sidewalk chalk recipe is easy. It’s cheap. And you’re going to love it:

To make homemade sidewalk chalk, you’ll need plaster of Paris, molds for the chalk, soon-to-be disposable mixing containers (I use stuff that we’re about to throw away or recycle, anyway), and pigment. For pigment, you can use whatever you have on hand–some ideas are food coloring, liquid watercolors, or powdered tempera, which is what I usually use.

Follow the recipe on the package of plaster of Paris to mix up perhaps two cups’ worth, then add your pigment. If you, too, are using powdered tempera, start with one tablespoon, and gradually add more until you’re satisfied. Whatever pigment you use, liquid or powder, you’ll slightly throw off the proportions in your plaster of Paris mixture. This is actually a good thing, because then the plaster will set a little softer, making a better chalk. If the mixture becomes too thick to pour because of dried pigment, or too watery because of liquid pigment, simply stir in more dry plaster or water until you have that pancake batter consistency back. 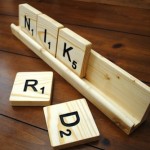 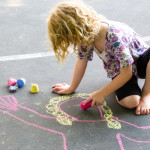