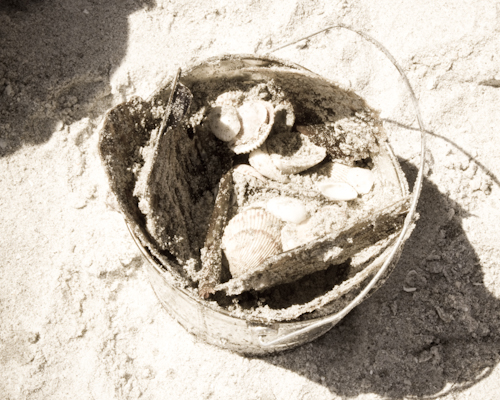 My girls and I are in Florida this week, and one of the things that we’re having the most fun doing here (other than getting our nerd on with NASA) is collecting seashells.

Waist deep in the ocean, my daughters floating in inner tubes next to me, I felt on the sand below my feet what could only be a giant seashell. I don’t dunk my head under water on purpose, but I am pretty dexterous with my toes, so it wasn’t long before I’d snagged the shell and hauled it up for my daughters to look at, only to find a GIGANTIC hermit crab looking back at us, waving its hermit crab claws. Girlish squeals ensued.

You and I wouldn’t dream, I don’t think, of taking home a seashell in which a hermit crab or mollusk or other living creature already resided, no more than we’d dream of prying a living starfish off a rock and gluing it to the latest craft project. Would you buy a dead starfish in a gift shop by the ocean, however, and put some hot glue on that?

Would you buy a gorgeous conch shell, from a bin of hundreds in that same gift shop?

Okay, but what if you found that conch shell washed up onto the beach at low tide? Is it okay to keep it then, or do you need to leave it there in case a hermit crab in need of a new home wanders by?

Seashell collectors who collect their shells for display or as a hobby do pick up what are called “living shells,” which are shells that contain critters. They claim that “dead shells” deteriorate quickly, and so live collecting is the only way to ensure the best specimens.

I’m not in charge of what other shell collectors do, but I am confident that, in collecting seashells to use for craft projects, my need for perfection isn’t so extreme that I’m yanking little hermit crabs out of their homes.

In my research, I haven’t found any sources that claim that tourists collecting empty shells from beaches pose a threat to the habitat of the hermit crab, so I do collect empty shells. I also collect as many bivalve shells as I feel like, and dead sand dollars washed up onto the sand whenever I find them, and even, once, a piece of coral I found I can’t even tell you how many thousands of miles away from the closest reef.

Of course, it’s very rare to find a gigantic perfect shell washed up by the tide, and those stores by the beach that sell seashells by the bin are especially tempting to my little girls, who are studying seashells in our homeschool right now and thus fancy themselves expert collectors.

To my daughters’ great outrage, however, I have flatly forbidden buying shells from these stores. I painted a picture for them of big nets in the ocean, dragging up all the ocean creatures out of their homes and killing them so that tourists could buy their shells, and reminded them of the starfish that they petted in the touch tank at a museum here. We do, however, have tons of great seashells at home, passed down from my grandmother, who certainly had no ethical qualms against the beachside tourist shops, and this turned out to be an ethical way for us, at least, to form a good collection.

If you have no shell-collecting grandma of your own, thrift stores and garage sales are an excellent outlet–I was once given several bags of shells at the end of a tag sale, all in boxes labelled with the date and location from which they’d been collected. If I had the money for it, I’d also shop in the kind up upscale shops in which the shop owners can tell you the origin of every one of their one-of-a-kind items, or I’d buy from shop owners on Etsy or eBay who could also make me feel comfortable about their collecting practices.

I dropped that hermit crab back in the ocean after it waved one of its claws menacingly at me, and later, when my older daughter found a perfect shell on the beach, just a little larger than that crab, she tossed it in after him so that he’d have a home to grow into, so quickly that I didn’t have time for greedy second thoughts about what a nice shell it was. It turns out that she’s a more ethical seashell collector than I am, after all! 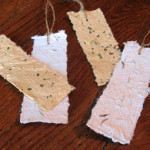 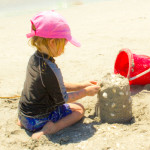