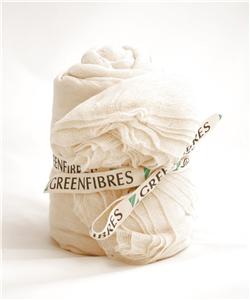 GreenFibres is a UK based online “eco goods and garments” shop which sells a number of hemp, linen, silk, and organic cotton fabrics by the yard.  Their cottons and linens are certified organic, and two of their fabrics are certified fair trade – others “are made under fair and safe working conditions.”  The fabrics they offer are the usual natural, unbleached fabrics with a couple of colorgrown patterns thrown in.

They offer two items that really caught my attention, though, because I hadn’t seen them anywhere else: organic cotton gauze, and organic cotton / nettle blend fabric.

The first is organic cotton gauze, a.k.a. netting.  They say that it’s great for gardening, with an almost throwaway comment that it’s “great as a craft material or dressing up prop!” Indeed, I’ve always associated gauze with doctoring more than with sewing, but since they’re selling it in the fabric section instead of bath and body, I thought I’d figure out what crafters could use it for.

And what do you know, you can make HALLOWEEN GHOSTS with it!  It’s serendipity, I tell ya.  But if anyone  uses it for other crafty projects, I’m all ears. 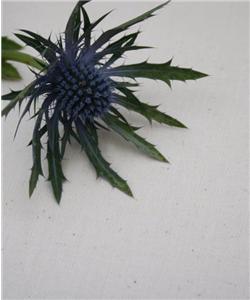 The other item that intrigued me was a 10% nettle and 90% organic cotton blend.  Call me ignorant, but when I hear about fabric made from nettles, all I could think was “um, scratchy?” Turns out that nettles have a lot to recommend them as a fabric ingredient, and I’m probably the last to know.  The Guardian reported FIVE YEARS AGO that nettles were the next big thing in eco-friendly fabrics:

Unlike cotton, farming nettles does not require the use of pesticides and nor does it leach vital minerals from the soil. The EU is also said to be interested in the potential of nettle farming, not least because the plant attracts insects and butterflies.

Treehugger asked in 2006 if nettles were the next bamboo, but I have to say that I haven’t seen any nettle sheets in Bed Bath and Beyond lately.  I think there’s probably a PR issue.  I doubt most people would know a nettle if it grew in their front lawn (unless they’ve seen the picture over there), but somehow most people seem to know that nettles don’t have a rep for soft and cuddly.  If anyone figures out how to make fabric out of briars, they’ll probably face similar challenges.

The GreenFibres website, though, says the fabric is slightly silky on one side due to the nettle content, so it apparently has something more going for it than I would expect.