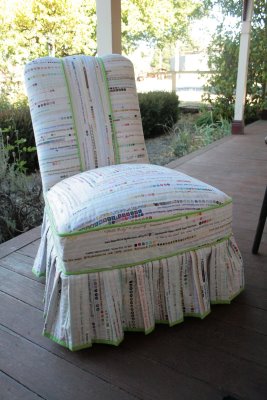 Self-proclaimed crazy selvedge lady, Jodie Carleton of Vintage RicRac, never lets a scrap go to waste.  Not even the selvedge.  She developed her own process for turning fabric selvedge into “cloth”.  She has used selvedge to make everything from a dress to pillow covers.  Her latest project was this selvedge reupholstered chair.  I have never been so inspired to be more creative and less wasteful. 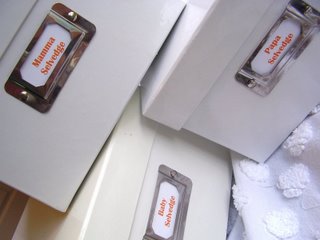 Jodie has become so enamored with selvedge she even created a selvedge storage system.  She keeps three boxes labeled Papa Selvedge, Mamma Selvedge, and Baby Selvedge.  She explains the Papa Selvedge box is the long strips she cuts off yardage.  I assume then Baby Selvedge are short bits and Mamma Selvedge is somewhere in between.  I also assume she had more than three photo boxes worth of selvedge to create the dress and chair. 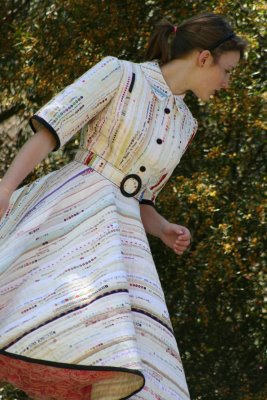 If you want to try your own hand and a selvedge creation, check out Jodie’s complete tutorial to make a selvedge doll quilt, her first selvedge project.  The tutorial gives the basics on how to piece your selvedge strips and how to foundation piece them to a cotton backing.  From there you can make whatever you decide.  I think a selvedge covered cork board in a craft/sewing room would be genius.

I am a work-at-home mom busy chasing after my son and establishing my eco-business, Tiny Décor. I also write the Tiny Décor Blog aimed at modern parents trying to go green for their kids. Tiny Décor has allowed me to turn a passion for sewing, craft, and environmentalism into a business. Blog writing has become an outlet for me to share my experiences going green, being a parent, and loving the planet. 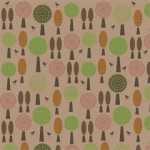 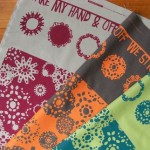