PROS: The projects range in skill-level from basic to advanced, with lots of doable creations along that entire range, and the projects, when done as instructed, actually WORK. Especially with food crafting, that’s a biggie. If you were trying to recreate Martha Stewart’s sugar cube cottage, for instance, I’d tell you good luck–it ain’t gonna look anything like it does in the picture, even if you can keep it from falling down entirely. The Rice Krispies Treat Christmas trees that my young daughters and I made, however, using the step-by-step instructions from Candy Construction, were perfect. Even without the ability to form them into perfect cones with all the candies placed at uniform intervals, the trees looked great, and my girls were absolutely thrilled.

That’s the kind of outcome I look for in a craft book.

CONS: Bowers treats candy crafting with children in a pretty low-key manner, and throws out her suggestions for encouraging children to build with their candy instead of eating it in such a way that she really seems to think that my kids won’t gobble up as much candy as their fists can hold and then run around the room shrieking until they crash.

Every time we begin one of these candy construction projects, my kids gobble up as much candy as their fists can hold and then run around the room shrieking until they crash.

So at least in my house, I can’t engage my children in one of these projects and delude myself into thinking that they’re not going to over-indulge. And that’s okay, because occasional candy consumption is not one of the many issues that I’m fanatical about, but it does make Candy Constructions a craft book that only gets occasional use.

Also, candy is generally highly over-packaged. If you’re very concerned about the amount of consumer waste that you create, you’re going to want to make a lot of substitutions here, finding bulk-packaged items to replace the individually-packaged ingredients such as Hershey’s Kisses, Little Debbies, peppermints, etc.

Overall, however, I really like the message that Candy Construction sends. Candy Construction takes candy out of the small mindset that treats it as something only to be gobbled up by the fistfull, and puts it into a larger context that allows us to enjoy its color, its form, its texture, its size, and its utility as a building material. Sure, candy is good for eating, but it’s also good for a lot of other stuff, so that you don’t have to only eat it.

I find that to be a very healthy attitude. 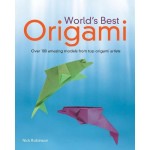 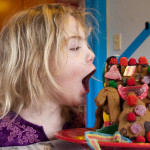