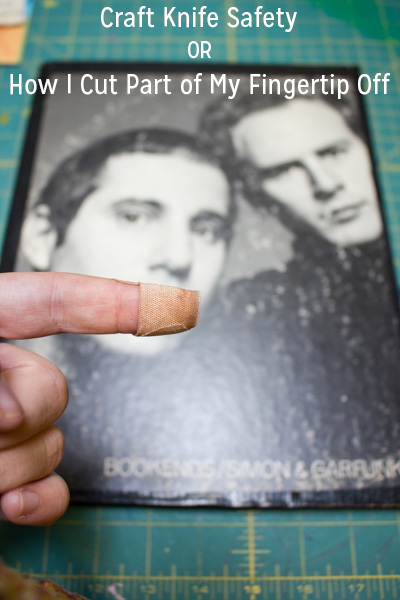 I was home alone with my kids one Sunday night, using a craft knife to make folders upcycled from vintage record album covers.

You know, as one does.

I’d just put a new blade into my re-usable x-acto knife, so it was super sharp. Maybe I was getting a little tired. Maybe I’d had a glass of wine with dinner earlier.

That’s relevant info, you will see, because as I made a long cut down one side of the cardboard record album cover, I also sliced a big chunk of flesh almost completely off of the top right side of my left index finger.

In the universal move of someone who knows that they have just injured themselves REALLY badly, I of course yelled and squeezed my left index finger hard in my right fist and immediately decided that I would never, ever, EVER look.

Hearing me shout, both of my kids came running. “Don’t freak out,” I told them, “But Mommy just hurt herself a lot.”

“Ummm….” I replied, but just then fat drops of blood began to drip steadily from my closed fist onto the floor.

Spoiler alert: We all kind of freaked out a little bit.

I had a couple of vague thoughts about driving myself to the hospital, but then I decided that what I was actually going to do was vomit and faint, in either order, so driving myself on the highway was pretty much out. Instead, I made it as far as the living room floor, got the kids to bring me a towel so I could put pressure on my finger, laid myself down in the recovery position (in case I fainted and THEN vomited), and put the kids to work helping me try to avoid both.

Fainting or wanting to vomit after you’ve cut yourself is a simple instance of vasovagal syncope, and it’s not such a big deal, except that it sucks and also if I’d fainted, my kids would have lost their little minds. For me, coping strategies to avoid fainting and vomiting include a super-cold, wet washcloth on my forehead and my stomach, raising my feet, and also distraction techniques like putting on music and smelling peppermint essential oil. Also breathing. Breathing can’t be overrated.

I laid on the floor and breathed and didn’t faint until my husband finally got home from the gym. We’re kind of DIYers, so instead of going to the hospital he stuck that flap of flesh back onto my finger with a band-aid and a ton of antibiotic cream, gave me a sugary drink, and put me to bed.

A week and some change later, and my finger is healing, but it’s not the most awesome thing ever, and I am no longer going to win any left fingertip beauty awards, not to mention that my violin playing is shot to hell. I also can’t decide if that entire piece of flesh is going to scab up and fall off, or if I’ll just no longer have any feeling in it. Good times, amiright?

Fortunately, most craft knife safety is common sense. Don’t cut when you’re sleepy, or after you’ve had a glass of wine with dinner. Maybe don’t cut while you’re also watching Orange is the New Black, especially if you’re going to look up in shock because you can’t BELIEVE that Piper just got herself into another pickle! Seriously, can that woman just not keep her head down and do her time?!?

If you’re looking for a more comprehensive guide on craft knife safety, here’s a good one. It includes things like covering the blade when they’re not in use, making short cuts instead of long ones, and concentrating–that’s a good one to know!

The MOST important tip, however, is this one: 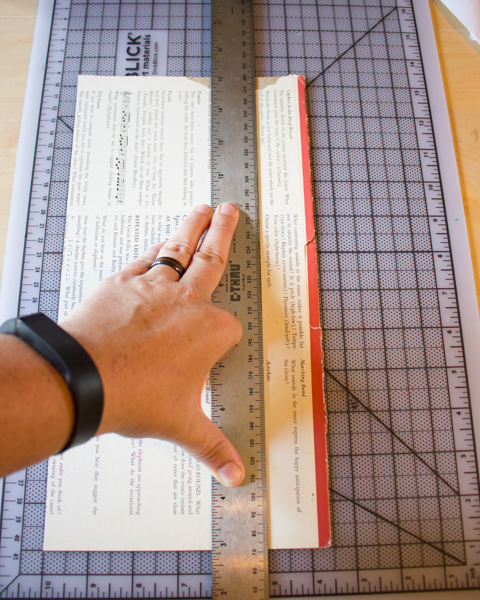 My left fingertip which may or may not stay attached to the rest of my finger wishes that I had done that!