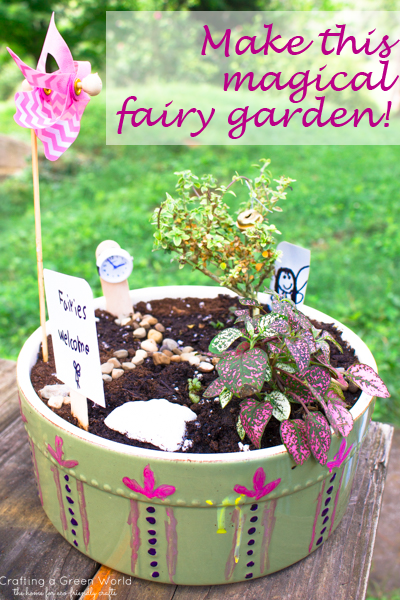 Want to make something whimsical and imaginative?

Want a miniature garden that’s as lovely as large one?

Want to share your love of growing things with a kid?

Fairy gardening is a great kid craft, but fairy gardens aren’t just for kids; they’re for anyone who has an imagination and a desire to grow something green. Using the books Fairy Gardening

(both of which I received for free from the publisher), my kids and I created a couple of beautiful fairy gardens for their bedroom. We used tons of upcycled materials in the making, and I think it makes the gardens look even cuter.

The choice of a good upcycled container is the key to making a long-lasting upcycled fairy garden. Fairy Gardening has several examples of good upcycled containers, including a thrifted dresser (the key ingredient to making a dresser work as a container garden? Roofing tar!), but for our gardens, one kid chose an old metal bowl that had been part of their mud kitchen set-up, and the other kid chose a cracked casserole dish donated to my Girl Scout troop to use in a mosaic project (we ended up with more than enough green pieces!). My younger daughter embellished the outside of this casserole dish with ceramics markers, after we consulted each other and decided that the crack was small enough that it wouldn’t be a leaking hazard. 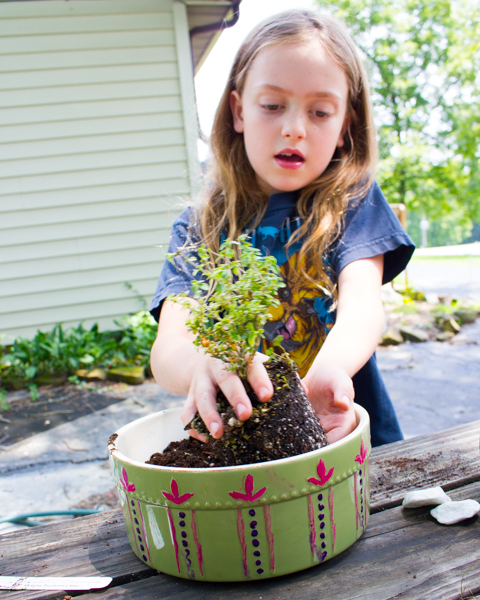 Fairy Gardening also includes a long list of plants that work well in small-scale containers, everything from groundcovers to miniature furs. I took my kids to our local nursery and let them each choose two plants (although my older kid later decided that she wouldn’t actually plant her Venus flytrap in her fairy garden, but rather keep it on the kitchen windowsill where it can catch gnats. I plan to encourage her to spread chia seeds in her garden). Fairy Gardening 101 is helpful when planning where to place each plant, because the images show some of the gardens in several stages of growth; it’s easy to forget that the small succulent that you plant is going to grow and reproduce!

My kids had the most fun, however, with decorating their fairy gardens. One kid created a pebble pathway in her garden; the other kid set out a couple of marble “boulders” for the fairies to sit on. I keep a bin into which I toss random objects as they come my way–keys of unknown provenance, corks, novelty erasers, that interesting bead that I found on the ground that one time, etc. Both kids LOVED mining this bin for fairy garden decorations–in fact, my older kid’s garden sort of looks like a fairy junkyard, or the garden of a VERY eclectic, packrat sort of fairy:

And this is an important point that I think that I have to make about fairy gardening: it doesn’t have to be cute. I know that all the fairy gardens that you see on Pinterest are cute, and yes, my younger kid’s fairy garden is SUPER cute–I mean, she glued an old watch face to a popsicle stick, and it still tells the time! She hung a jingle bell by a thread from her miniature shrub!

But YOUR fairy garden? It doesn’t have to be cute at all. It can totally have a Venus flytrap, if that’s what you’re into (I’m still trying to convince my kid to add hers in). It can totally have a T-rex skull, and Wolverine’s head, if that’s what you like. My kid’s eclectic, junkyard fairy garden pleases her, and I’m sure there are plenty of fairies out there who are going to love it, too.

I received free copies of Fairy Gardening and Fairy Gardening 101, because I can’t review a book if it hasn’t inspired my child to make a miniature junkyard on top of her dresser! 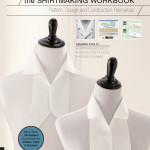 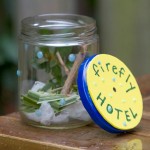