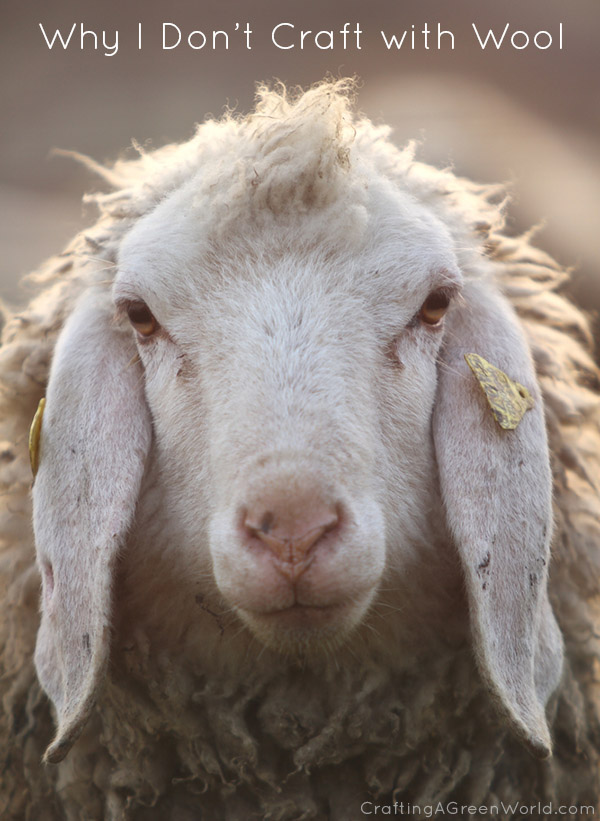 Have you ever wondered, “Is wool vegan?” Here’s why animal rights activists don’t wear or craft with wool.

Back in 2011, I ran a mini series of posts called Vegan Crafting Made Easy. Here’s the p0st that started it all. A vegan lifestyle means more than just not eating animal products. Vegan crafters avoid animal products as much as we can in our day to day. As a vegan, I don’t believe that we need to exploit animals in any way, whether it’s drinking their milk, wearing their skin, or crafting with their fur.

Over at our sister site Feelgood Style, our newest writer Jill Ettinger wrote a piece recently on why wool clothing is as bad as fur from an animal rights standpoint. You can read her thoughts in full below. The points she makes about wool clothing also apply to wool and other sheep-derived craft supplies: yarn, felt, lanolin, etc.

Before we get into why wool is not vegan, I wanted to share a few resources for finding wool alternatives. The resources below are from the Vegan Crafting Made Easy series, and it explores vegan options to replace the wool in your crafty stash:

Is wool vegan? Why Wool is Often as Bad as for Animals as Fur 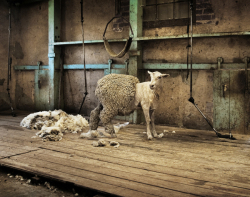 Wool is everywhere. It’s in sweaters, socks, pants, even bedding. But is it an ethical fabric? Or is wool clothing as bad as fur?

We think of wool as sheep shearing, much in the same ways we think of animal farms: those bucolic images of happy animals frolicking around barns roomier than a New York City penthouse. But the wool industry has a dark side. Several, actually.

Domestic sheep and goats are bred to overproduce wool so that we can sheer it off of them. They also, as a result, produce more skin. Mulesing, is the practice of removing this excess skin around a sheep’s backside. To leave it there can allow feces to build up and (gross alert), maggots to literally infest and even kill the sheep. So mulesing is a practice of cutting off the wool and skin of young sheep’s behinds. This is almost always done without painkillers. Raw tissue is exposed and the injury can cause a lifetime of pain.

This isn’t a rare occurrence in wool production. It’s the norm, just like tail-docking pigs or beak-searing young chickens in factory farming. It’s part of industrial fashion. And while wool itself is a “natural” fiber (if you consider someone else’s fur or hair a fashionable fiber), it’s now as mechanized as our food, where compassion and ethics are passed up for profits.

The other dark side of the wool industry is angora wool. That super soft expensive wool that doesn’t come from sheep, but from some very adorable rabbits. Just like with wool sheep, angora rabbits suffer immensely during cutting processes. Their legs are tightly bound or they’re hung in the air so that they can’t try to run away (which is what rabbits are really good at doing). Thin-skinned angora rabbits are routinely injured during the cutting process, especially since they’re anxious and trying to escape the situation.

And like sheep raised for their wool, angora rabbits are kept in cages or on cramped farms where the stench of feces and urine sting their sensitive eyes.

In a recent victory for angora rabbits, Lacoste has decided to pull all angora wool products from its collections.

Millions of people have given up fur, and millions more commit to it every year because killing an animal for something that looks better on the animal than it ever will on a human is nonsensical and especially cruel. Wool may not take as many lives right away, but it does create years of suffering for animals who do end up dead eventually, not usually with the dignity they deserve.

Plenty of vegan fabrics exist that can keep you warm and toasty—from nylon and acrylic to revolutionary recycled and upcycled materials being produced by forward-thinking companies like Patagonia. 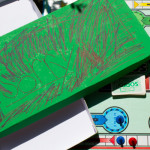 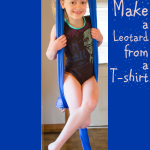