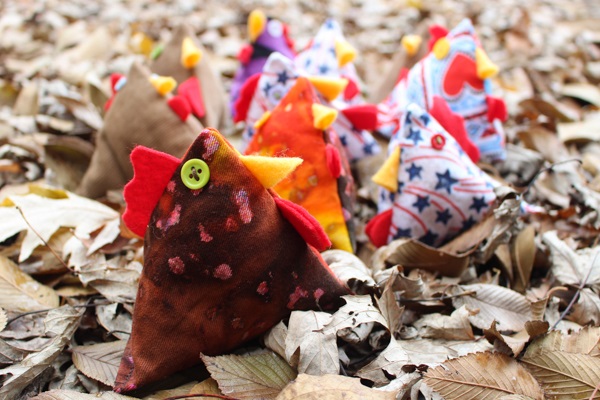 These cute chickens make great little gifts, and since you can sew them up quickly completely from scraps, no two are alike! So search your scrap fabric stash, then sew yourself up an entire flock of lovable, snuggable, and highly-giftable bean bag chickens. 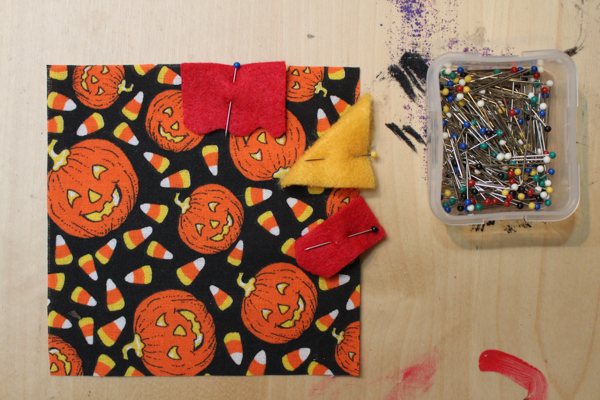 1. Cut two squares of fabric to the dimensions 4.5″ x 4.5″. I always use two identical prints, but you certainly don’t have to.

2. Pin on the chicken parts. From the yellow or orange felt, cut a square that’s about 1″ x 1″. Fold it in half diagonally, and pin it about two-thirds of the way up the right side of one fabric square. Notice in the above pic that the diagonal fold is on top and the two edges of the felt triangle are parallel to the sides of the fabric. Pin in place.

From the red felt, cut another square that’s also about 1″ x 1″. Scallop the top to look like the top of a chicken’s comb. Pin it with the scallops facing in and the opposite edge aligned with the top of the fabric square, about a fourth of the way from the top right corner.

Also from the red felt, cut a final 1″ x 1″ square. Fold it in half, and cut out two wattles. Angle these to be parallel to the diagonal fold on your chicken’s beak, and pin them just below the beak, facing in.

3. Sew three sides of the beanbag. Put the two fabric squares together, right sides facing, and sew three sides together. You’ll start with the top side, beginning with the end furthest away from the chicken’s beak. Sew along the top, taking away the pin that holds the comb before you sew over it, then down the front, removing the pins and sewing the chicken’s beak and wattle, then sew the bottom. Don’t sew that fourth side!

Turn the beanbag right side out and iron flat. 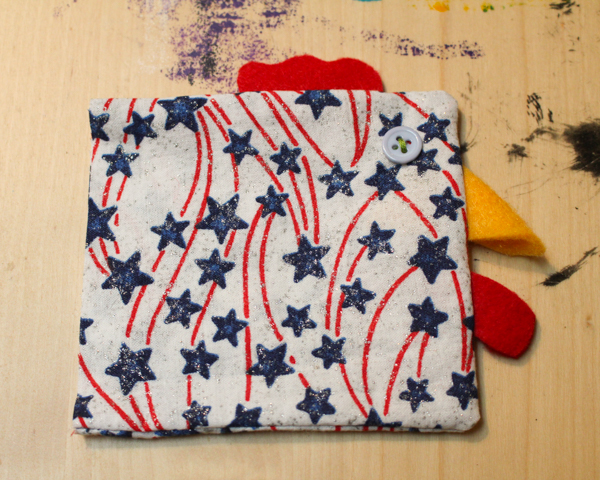 4. Sew on the button eyes. It would be easier to do this step before you sew the three sides of the bean bag together, but I had a lot of trouble getting my eyes to line up nicely when I did that. Instead, I sew them on after the three sides are sewn and all the rest of the chicken features are in place. Feel free to try both ways and choose what works best for you.

To place the eyes, first, play with the placement of one eye until you’re satisfied, then mark that spot with chalk. Use a pencil point or your finger to make a bump in the fabric at that spot so that you can feel where to make your mark on the other side of the chicken. Sew on each eye individually using embroidery floss.

Pro tip: Fold the open edge of the bean bag over a couple of times so that you have less fabric to deal with as you’re trying to sew the button eyes on inside the bean bag. It gets much easier with practice!

5. Crease the hem. Fold the raw edges of the hem inside about a quarter of an inch, and iron. 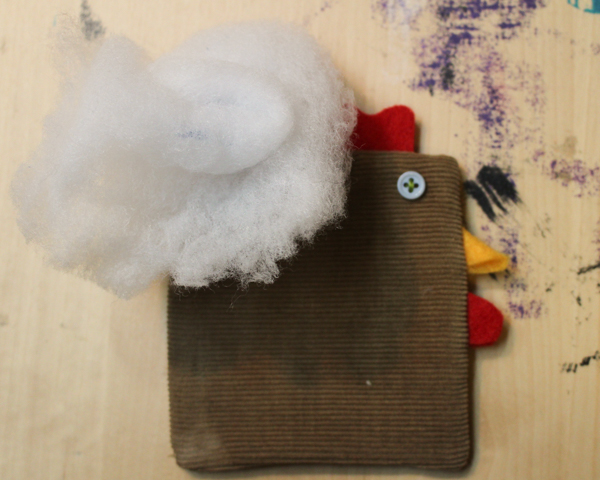 6. Stuff the bird. Grab an amount of fiberfill about the size of your fist, and use it to fill the top of the chicken. Fill the bottom with one or two handfuls of dry rice or beans or popcorn kernels. Stuff the fiberfill down as tightly as you can, to make sewing the last side shut easier. It will loft back out over the course of several minutes. 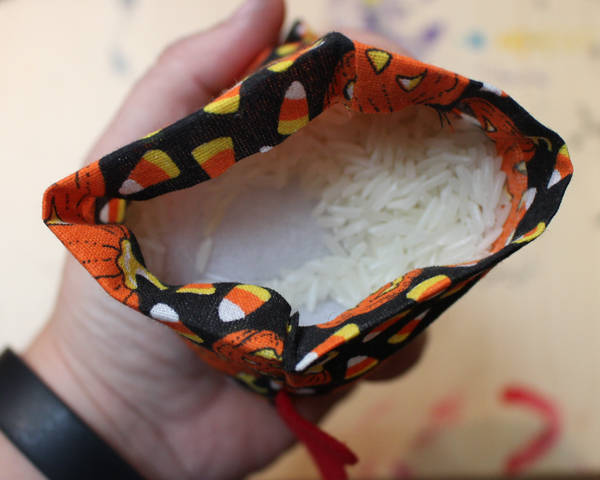 7. Sew the final seam. You’re going to sew this last side in an unusual way, so read carefully! 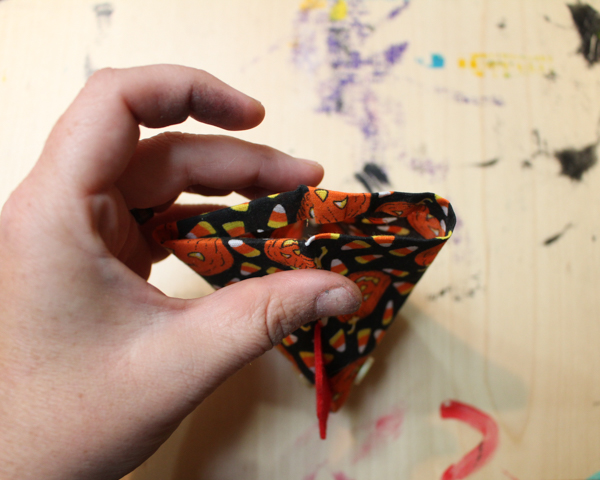 This is cattywampus to the way that you sew a regular bean bag, so make sure you’ve got it figured out before you start sewing. You’ll know you’ve got it right when the bean bag looks like a pyramid, not a square. Edge stitch that final seam closed and sit your bean bag chicken down. It will sit on its flat butt, that final seam is its tail, and the top of the pyramid is its adorable chicken face! 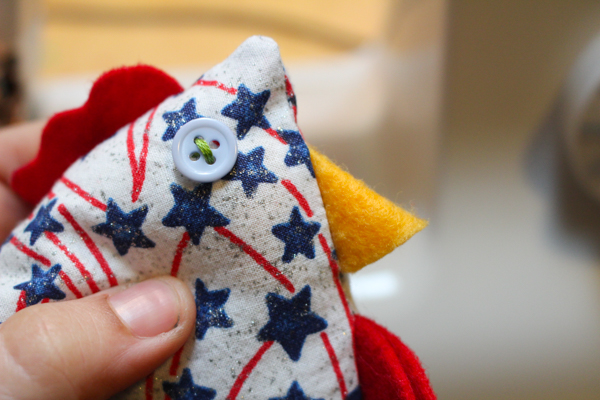 8. Tidy up the beak. This is optional, but I find that for nearly every chicken I sew, I want to trim the beak just a bit to make a cuter shape. Usually, I give the bottom a bit of a curve or a slightly different angle so that the shape is more sophisticated and natural-looking than just a triangle with straight sides. 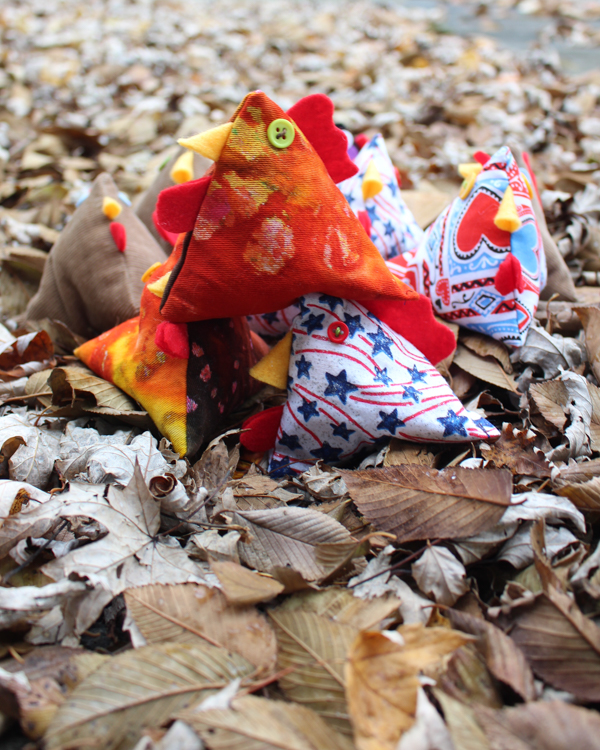 Once you’ve gotten the hang of these chickens, you’ll find that they sew up quite quickly. They make great presents, and since you’re using a varied combination of fabric scraps and stash buttons, each one has its own unique personality! 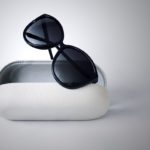 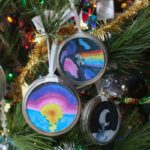