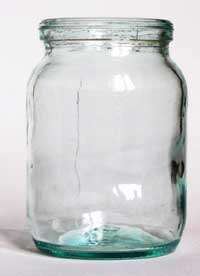 We are really, really, really trying to make most of our baby’s solid food instead of buying it in tiny glass jars. But apparently you’re not supposed to make your own carrots or spinach because of some issue with nitrate levels, and he really likes carrots and spinach, so we are generating a number of jars around here.

The lids don’t fit properly once they’re opened, which is a shame, or I could use them to store the food we’re making. The necks are smaller than the jars, which makes it annoying to feed him out of them, or I could use them as dishes. (Might do that anyway, actually, since we tossed out all the plastic in the kitchen a while back thanks to reports about safety issues on our sister blog Eco Child’s Play.)

While I investigate other brands in hopes of better reusability, what the heck can I do with all these bitty jars?

Yes, candles, I know. We don’t burn any in our house. What else? According to the internets, I can also glue stuff on them to make them look like reindeer, snowmen, turkeys, or Santa Claus. Slightly out of season, I’m afraid. If the lids fit, I could definitely make progress on some areas of our home with a baby food jar organizer or two, so that’s something to keep in mind for the future. Speaking of the lids, if I had a small army of slightly larger children, I could use them up by making baby food jar lid finger cymbals. If we’re ever invaded, I should be able to buy myself some time with that project. Then there will be noise.

Really, though, what’s an eco-crafty mom to do?

I love these firefly lights, and you could green them up by skipping the fireflies so you don’t use paint (or would milk paint bond to glass?). Candles outside would be a sweet look for a party, supposing that I ever get organized enough to host one.

If people can make chandeliers from yogurt cups, plastic spoons, and ping pong balls, as well as teacups, and milk jugs and a hula hoop, I’m sure there’s a light fixture idea out there for baby food jars. I just don’t want to unleash my husband to figure it out until he’s finished installing the safety gate at the top of the stairs.

This baby food jar sewing kit is too cute. You can find instructions for a similar pincushion effect on Cut Out + Keep. I don’t imagine I’d need more than one, though. And I could buy this cute blue one on Etsy if I really want one.

Also on Etsy, grass in a baby food jar! Brilliant, and the paintings on the jars are lovely.

I don’t want to invoke the wrath of the Fake Plastic Flower Death Squad, but these baby food jar gardens offer some possibilities. You can probably score them at thrift stores or steal them out of my sister’s house, ’cause honestly, she’s WAY too cool to have silk flower arrangements for decoration. (Rebecca, consider this a public intervention.) However, I’d prefer to see these re-imagined as tiny dioramas, 3-d collages, or what have you. You can mount paper or paper affixed to cardstock on popsicle sticks or something similar but green – perhaps chopsticks?

In the end, I know the best option is to REDUCE before looking for ways to reuse and recycle (though we are recycling, of course). These ideas, though, give me some hope that I can make my limited supply of jars into something lovely.