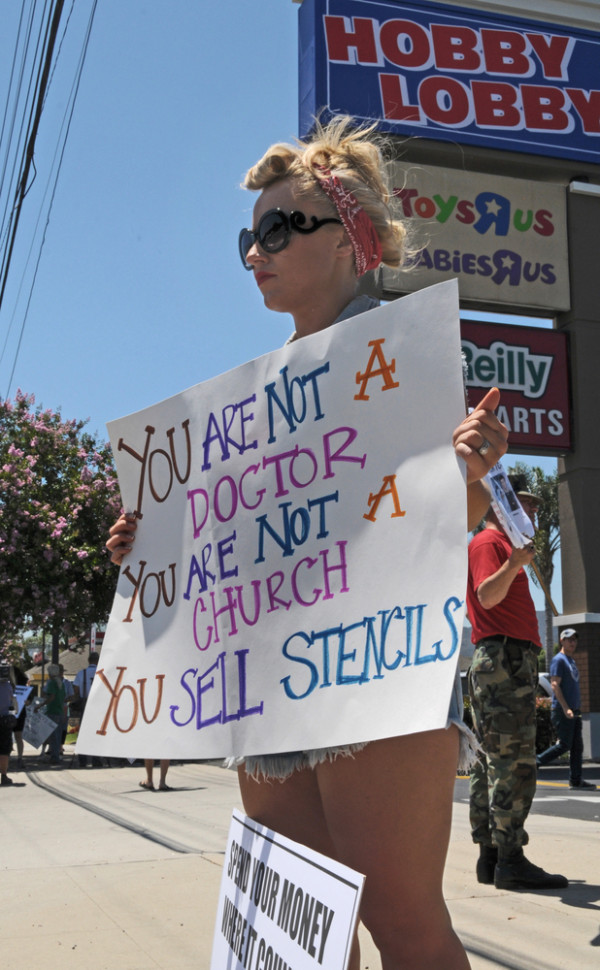 We’re going to get a little bit political up in here today. Let’ talk a bit about the Hobby Lobby birth control case and what it means.

Why is a craft site talking about the Supreme Court?. As consumers, we vote with our wallets. When we spend money at Hobby Lobby, we are essentially telling the owners of that company that we support their political viewpoints. These companies donate to political campaigns and challenge federal law with the money we spend there. For a mindful crafter, it’s important to know not just where our materials come from but who’s profiting when we buy them.

Related: Hobby Lobby to Jewish Crafters: “We don’t cater to you people.”

I’ve been holding back on saying too much about the Hobby Lobby birth control case. I know that birth control is a touchy subject, and cases like these tend to have consequences that don’t become clear right away. Cosmopolitan recently debunked some myths about this Supreme Court decision, though, and a good bit of that information felt like it was worth sharing here.

The Cosmo article focuses on myths about the case, and what I’d like to lay out here are some key facts, including the implications of this decision.

Whether you agree or disagree with what Hobby Lobby is doing, I hope that you’ll seriously consider the precedent that the Hobby Lobby birth control decision sets. Because the next decision like this may not align with your beliefs.

Fact 1: Hobby Lobby isn’t denying all of its employees birth control, but that’s not the whole story.

There are four types of birth control that Hobby Lobby doesn’t want to cover: Plan B, Ella, and two sorts of IUD. They will still cover the pill. This Hobby Lobby birth control decision means that other companies will be able to deny employees coverage for the birth control pill, however. In fact, Eden Organic Foods just filed suit to do that very thing.

The Cosmo piece also points out that denying women coverage for IUDs means that  women who can’t use hormonal birth control are up a creek.

Fact 2: This decision implies that corporations can hold religious beliefs.

This is scary. I don’t agree with Hobby Lobby’s beliefs about birth control, but even if you do, this SCOTUS decision should shake you up as much as Citizens United. The Citizens United case ruled that corporations are people. This case took that precedent and added that corporations are people with religious beliefs that may exempt them from federal laws.

What if your boss felt that covering a medication you rely on violated his religious beliefs? This case opens the door for employers do intrude on the private relationship that you have with your doctor.

We’ve established that this decision has the potential to impact all birth control coverage, not just the four types that Hobby Lobby wants to deny its employees.

Hormonal birth control, for example, helps women regulate our cycles and prevents painful ovarian cysts. As a woman who deals with recurring cysts I find it very worrisome that employers can now decide that my medical condition is less important than their religious beliefs.

“Find a different job” seems to be a common refrain in this debate. If you want birth control that your company’s plan doesn’t cover, just find another job. Just like that.

There are two problems here. First, have you tried to find a job lately? It’s not so easy. Second, this decision covers “closely held” companies. Ninety percent of the companies in the U.S. fit this definition. That makes “find another job” an even taller order, and not one that a minimum wage Hobby Lobby employee would have an easy time filling.

Beliefs aside, the Hobby Lobby birth control case impacts all of us.

The Hobby Lobby birth control decision implies that corporations are above the law. Corporations can now claim religious exceptions any time they don’t want to do something mandated by law. It’s the top of a slippery slope, and there’s a good chance that we will all lose on the way down.