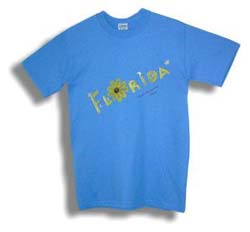 Ah yes, the souvenir t-shirt… too silly to wear, but what do you do with it?

I know Leslie’s probably going to be rocking us with recycled t-shirt projects from Generation T for quite some time, but I’ve also been racking up a few t-shirt craft ideas that I wanted to share. (Yes, we seem to have “fads” among the CAGW writers sometimes. First jeans, now t-shirts. Next up: socks?)

Specifically, I’ve been looking for t-shirt crafts that do NOT rely on fusible web. Since I wrote my two-part post a while back on how to think through the “green-ness” of your craft supplies using fusible web as an example, I’ve been less than enthusiastic about ever adhering the yucky stuff to a piece of fabric ever again. (In case you missed it, here’s the part on craft supply safety and the part on craft supply environmental impact.) I have one t-shirt quilt already planned, with the fusible web already purchased, but after that I’m done.

So what to do with cherished t-shirts after that?

The fabulous designer and crafter Betz White has a great idea for using embroidery hoops and t-shirts. Check our her post for examples. This idea seems like it would work as well with picture frames. In Austin, you can get scads of frames at thrift stores, so that would be cool.

I don’t think the recycled t-shirt bag at Martha Stewart would be too practical for heavy objects (sacks of flour, for example), but maybe I’m wrong. I guess it would depend on the shirt? It would definitely be great for turning children’s t-shirts into child-size bags. Etsy seller zJayne makes t-shirts into shopping bags and then turns the sleeves into little bags. Yay!

There’s a tutorial on Savvy Seams for making a recycled t-shirt pillow that doesn’t use fusible web for stabilizing. Instead, they recommend stay-stitching on the edge where the zipper goes, but other than that just using a knits needle and not stretching the material with your hands as you sew.

You may have already seen it on Craftzine, but I’m loving this tutorial for a kimono top made of recycled t-shirts.

Again, no mention of any special preparations for working with t-shirts. I’m starting to wonder if the fusible thing for t-shirt quilts is really just convenience more than necessity. Since it’s marketed as an “easy” project particularly for non-quilters, I can see why it happens, but I’m not sure it’s worth it. The great thing about t-shirt quilts, unlike the projects above, is the sheer number of t-shirts that are consumed, so it would be nice to find a middle ground.

Katy, who blogs at Creating Misericordia, had this possible idea about working with t-shirts that could help reclaim the t-shirt quilt for eco-crafting while keeping its status as fairly easy:

I haven’t tried this method, but since shoulder seams on knit/jersey garments are often sewn with tape for stability, you might be able to tape the seams of a t-shirt quilt to keep it from stretching, rather than using fusible interfacing.

I’m intrigued by this. I know exactly the stuff she’s talking about from seeing it in finished clothing, but I have no idea what it is. Anyone? 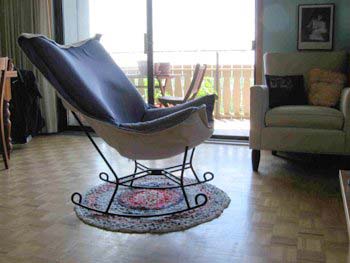 In any event, I mentioned in my post on the Amish approach to quilting that recycling t-shirts often creates waste – the back and sleeves, specifically. Crafting A Green World reader Anitra sent us her solution for t-shirt scraps. She’s a fellow Generation T fan, and she’s found a way to use even the smallest scraps of t-shirt fabric left over from a quilt. She sent us this photo and a description:

It’s made of scraps left over from a T-shirt quilt I made for a friend. It’s great because it keeps my rocker from scuffing the floor, and it inspired me to start getting religious about saving all my usable fabric scraps, not just the bigger pieces. Now I keep everything in a big box under my sewing table.

Yay, Anitra! And thanks for sharing your project! For any t-shirt project you undertake, quilt or not, those extra bits can really add up. In my house, we use them for washable baby wipes, but that’s nowhere near as fun. 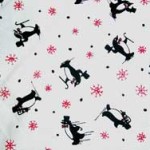 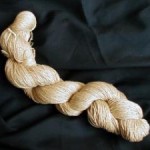