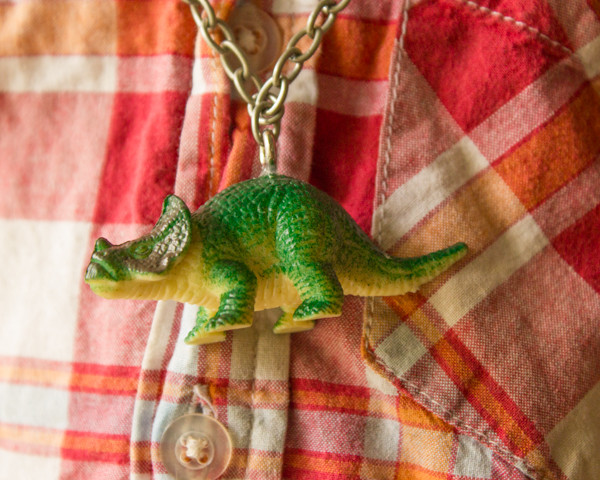 Got a few too many little toys?

I do! I don’t know how my kids ended up with SO many little toy dinosaurs and horses and action figures and army people (okay, I DO know…the answer is Goodwill), but I do know that they have more, and I mean powerfully, shamefully more, than they need.

The kids aren’t yet ready to give up a single critter from their 5,000 plastic critter collection, but I do hate the sight of toys that never get played with (did The Velveteen Rabbit scar YOU, too?), so for a while now we’ve had a project going in which we transform some of their little toys into charms.

These toy charms can be worn on a necklace or bracelet, one at a time or in a whole herd. They make fine jewelry on their own, but the secret trick to these little charms is the latch that allows you to release them from their jewelry status. In the blink of an eye, you’ve gone from having a necklace full of toy dinosaurs to a handful of toy dinosaurs, ready to make standing in line at the grocery store SO much more bearable.

Here’s how to make your own:

Next >> How to Make the Toy Charms