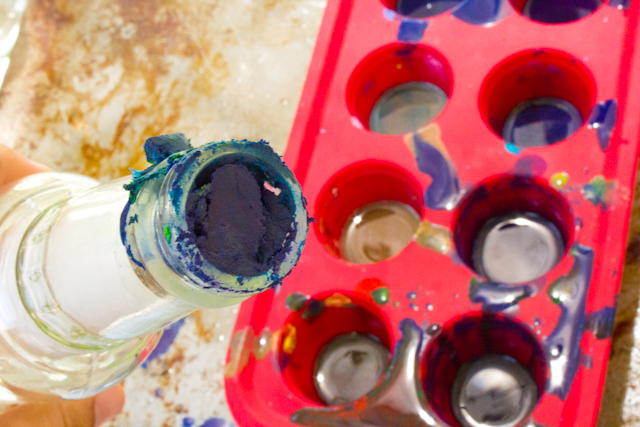 5. Seal the bottle using crayon wax. Follow my tutorial on making upcycled crayons, but take the crayons out of the oven when they’re only mushy, NOT melted. Using a popsicle stick, scrape up the mushy crayon and use it to stuff the opening of the bottles full. It won’t look cute or exceptionally sturdy, but you’re not going to stop here.

Instead, put the crayons back in the oven and let them get completely melted this time. When they’re melted, remove them again from the oven, and dip the bottle openings into the liquid crayon. You’ll notice that the melted crayon will begin to cover the opening and the top edges of the bottle, forming an attractive seal; dip the bottles as many times as you’d like to attain the perfect look and the perfect strong seal (If you try to simply dip the bottles into the melted crayon without sealing them with mushy crayons first, the crayon wax will never cover the opening of the bottle).

Obviously, these bottles are best hand-delivered; we’re fond of the doorbell ditch method of delivering even conventional invitations, because we like to save the postage, but mailing a message in a bottle is spendy…but do-able! To mail a glass bottle, just stuff it in a box, pad it with crumpled newspapers, and mark the box as fragile. If you plan to mail more than one or two, however, then consider using a plastic bottle for your project, instead of glass–it’s still upcycling, it will be a LOT cheaper to mail, and you won’t even have to box it. 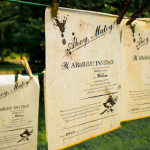